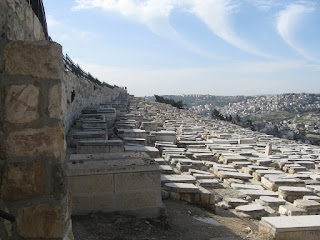 (The cemetary on the western slope of the Mount of Olives, heading down to the Kidron Valley.)

I'm preaching this Sunday out of Mark 14:53-65. Jesus is brought before the High Priest Caiaphas and members of the Sanhedrin.

It's instructive to note that Caiaphas was an actual person, in history. On August 16, 1992, the New York Times ran the story of the discovery of Caiaphas' ossuary, and the family cave-tomb he was buried in. The article reads: "Israeli archaeologists are used to stumbling across the touchstones of early Christian and Jewish history. in the Mideast, it is a common occupational pleasure. But even they were a little amazed when an elaborate cave on the edge of the Judean desert near Jerusalem turned out to contain the family tomb of Caiaphas, the Jewish high priest who presided at the trial of Jesus."

But was this ossuary that of the Caiaphas in the Jesus-story of Mark 14? In Princeton scholar Jame Charleworth's Jesus and Archaeology, Craig Evans has an essay entitled "Excavating Caiaphas, Pilate, and Simon of Cyrene: Assessing the Literary and Archaeological Evidence."  Evans cites Jewish historian Josephus's reference to "Joseph Caiaphas" and "Joseph called Caiphas" (Antiquities 18:4:3, #95). In November 1990 workers in Jerusalem's Peace Forest (a mile south of the old city of Jerusalem) accidentally discovered an ancient burial cave in which one dozen ossuaries were found. Two of the boxes bear the name, written in Hebrew, "Qapha." One of the bone boxes has "Yehoseph bar Qaipha" on one end, and "Yehospeh bar Qapha" on one side. This particular ossuary contains the bones of a 60-year-old man, two infants, a toddler, a young boy, and a woman. Evans writes: "it could be the ossuary of Caiaphas the high priest, to whom Josephus refers to as "Joseph Caiaphas." For Evans, underline the word "could."

Today the "Caiaphas" ossuary, which is ornate and well-preserved, is in the Israel National Museum in Jerusalem. The skeletal remains were buried on the Mount of Olives. Evans writes: "In the nearby 'Akeldama' field and ravine, the tomb of Annas (John 18:13, 24), the high-priestly father-in-law of Caiaphas, may also have been identified." (Ib., 327) Evans further states that "several archaologists have identified the Yehoseph bar Qaiapha of the ossuary with the Joseph called Caiaphas of the narratives of Josephus and the New Testament Gospels... Spelling agreement with the rabbinic traditions noted above and especially with Josephus, who alone in the literature tells us that Caiaphas's full name was Joseph Caiaphas, has convinced these scholars that the identification is probable. Indeed, Dominic Crossan and Johnathan Reed have said with confidence: 'There should be no doubt that the chamber was the resting place of the family of the high priest Caiaphas named in the gospels for his role in the crucifixion, and it's very likely that the elderly man's bones were those of Caiaphas himself.' " (Ib., 327).

But Evans has doubts. Some argue that the 'Qayapha' reading is "difficult and improbable." (Ib., 328) "Part of the difficulty is the relative rarity of the Qayapha' name, which results in inadequate data for comparative analysis, as well as the poor quality of the ossuary inscriptions themselves, making certain idenfication of the [Hebrew letter] yod, as opposed to the [Hebrew letter] waw, very difficult. The Caiphas reading the the identification of this ossuary name has not been conclusively ruled out, but we must recognize how tenuous it is." (Ib., 328-329).

Evans, in his book Jesus and the Ossuaries, says other reasons to question that this ossuary was that of our biblical Caiaphas include: 1) "the crypt in which the ossuary was found is not on the level of ostentation that one would have expected to find in the case of a former high priest and son-in-law of Annas, the most influential high priest of the first century" (107); and 2) "it seems strange that the ossuary containing the remains of such an important person, who served for nearly nineteen years as high priest, would display such poorly incised inscriptions" (Ib.).