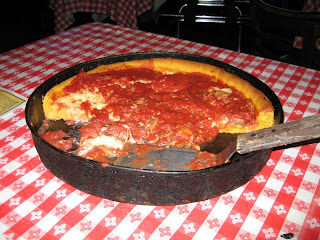 (Gino's East Pizza in Chicago. It falls just short, gratefully, of a maximally great pizza. I can barely look at this picture without salivating. It is: the world's greatest pizza.)

William Lane Craig here comments on his recent debate with atheist philosopher Victor Stenger. Craig presented a version of the ontological argument for God's existence. Stenger critiqued it by saying that, using the same kind of reasoning, one could prove the existence of a maximally great pizza.

Craig's point is that the idea of "maximally great pizza" is fundamentally incoherent. It's just Gaunilo's mistake again, re. his "perfect island." Neither islands nor pizzas nor any contingent things have intrinsic maximums. So Stenger's criticism of the ontological argument fails.
Posted by John Piippo at 3:20 PM