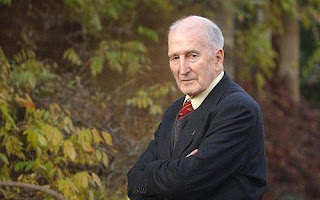 As an undergraduate philosophy major way back in the 1970s I read Antony Flew's classic essay "Theology and Falsification." There I met the "parable of the gardener," a story meant to argue for atheism over theism.

Then, many years later, Flew became a deist - he came to believe in a God. This development sent some atheists spinning to explain how one of their champions, arguably the most famous atheist in Europe, left his atheism.

The obit in The Telegraph says:

"When Flew revealed that he had come to the conclusion that there might be a God after all, it came as a shock to his fellow atheists, who had long regarded him as one of their foremost champions. Worse, he seemed to have deserted Plato for Aristotle, since it was two of Aquinas's famous five proofs for the existence of God – the arguments from design and for a prime mover – that had apparently clinched the matter.


After months of soul-searching, Flew concluded that research into DNA had "shown, by the almost unbelievable complexity of the arrangements which are needed to produce life, that intelligence must have been involved". Moreover, though he accepted Darwinian evolution, he felt that it could not explain the beginnings of life. "I have been persuaded that it is simply out of the question that the first living matter evolved out of dead matter and then developed into an extraordinarily complicated creature," he said.

Flew went on to make a video of his conversion entitled Has Science Discovered God? and seemed to want to atone for past errors: "As people have certainly been influenced by me, I want to try and correct the enormous damage I may have done," he said."
Posted by John Piippo at 11:25 PM