How the New Atheism Contributes to the Interest in Theism 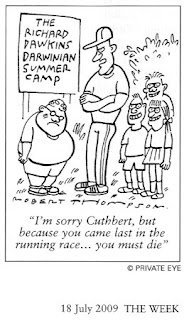 Madeleine Bunting has a piece in today's Sydney Morning Herald called "Atheists win a battle but may lose the war." Richard Dawkins and others, in spite of Dawkins's "sheer philosophical illiteracy," has actually helped to make "God" popular and discussable again. Bunting writes: "Perhaps New Atheism's publishing success is a case of winning a battle and losing the war - the main religions are currently experiencing massive expansion across most of the world."

Bunting says: "The great mistake the atheists made is to claim that religion started out as a clumsy stab at science - trying to explain how the world worked - and is now clearly redundant. That misses the point entirely: religion is not about explaining how an earthquake or flood happens; rather it offers meanings for such events." Yup. But note, please, that out of Christianity much science came and continues to come, from Kepler's idea that studying the heavens was studying the mind of God, to Francis Collins's reading the "language of God" in DNA. I have seen this up close and personal, in the lives of the many actual scientists who are friends and fellow Jesus-followers.

Bunting says: "The paradox of New Atheism is that in its bid to make religion unacceptable, it has contributed to making it a subject that is worth talking about again."

I agree. Which is why, for me, I am happy to see atheist signs on buses. When I write that, I mean it - no need to psychologize me on that one and argue that I am now trying to use some silly "reverse psychology" so as to get atheists to think "O my (non-) God! Our signs are actually encouraging theists, so we must remove them immediately!" No. It makes my philosophy classes so much more interesting. Yet I will add, sadly, that in spite of the relative media attention to the bus signs and the clattering of the New Atheists, most of the students in my classes have still not heard of them. I have ideas why this is the case...

Anyway - thanks to the New Atheists, "God hasn't attracted this intensity of debate in decades." And that...  does make the philosophical life a lot more fun.
Posted by John Piippo at 5:18 PM