If the Ontological Argument Is Sound, the Non-existence of God Has a Probability of Zero 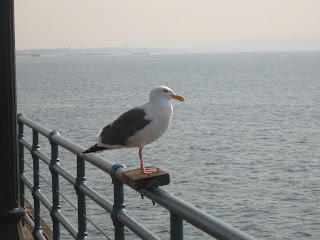 When I teach next fall my plan is to shift from teaching Anselm's version to Plantinga's modal version. With Craig now using it, I see a tiny renaissance on the horizon.

Michael Tooley, in his SEP essay on "The Problem of Evil," mentions the OA. Tooley writes: "Relatively few philosophers have held, of course, that the ontological argument is sound. But there have certainly been notable exceptions — such as Anselm and Descartes, and, in the last century, Charles Hartshorne (1962), Norman Malcolm (1960), and Alvin Plantinga (1974a, 1974b)." Then, Tooley says something I admit to never really thinking about re. the OA: "If the ontological argument were sound, it would provide a rather decisive refutation of the argument from evil. For in showing not merely that there is an omnipotent, omniscient, and morally perfect being, but that it is necessary that such a being exists, it would entail that the proposition that God does not exist must have probability zero on any body of evidence whatever." Of course! So, the amount of and kind of evil in the world could not be used as evidence against God's existence.

Now I'm off on another rabbit trail - here goes. If it could be proven (inductively, of course) that, most probably, Jesus of Nazareth never existed, then all intratextual analysis and argumentation used to debunk Christianity would be inconsequential. It would be sheer futility to spend time arguing that Jesus never rose from the dead if one has already admitted that he never existed. The probability of the resurrection of Jesus on the non-existence of Jesus is zero. The only reasons to engage in "Jesus" or "Christian" studies would be sociological (sociology of religion) and historical (history and literature of religions. My rabbit trail looks like this.

1. Jesus never existed.
2. Therefore, the probability that Jesus rose from the dead is zero.


If you're interested, see Robert Maydole's hyper-dense essay "The Ontological Argument" here. (pp. 553 ff.) Maydole concludes: "Ontological arguments are captivating. They convince some people but not others. Our purpose here was not to convince but simply to show that some ontological arguments are sound, do not beg the question, and are insulated from extant parodies. Yet good logic does not convince sometimes. Other times, something else is needed." (586)
Posted by John Piippo at 3:38 PM