N.T. Wright On the Women At the Empty Tomb 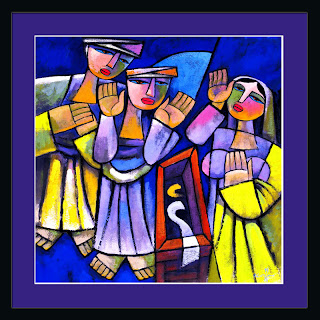 I am filling up a good portion of my Easter week by reading the passion and Easter Gospel accounts, and adding to these ongoing studies things like N.T. Wright's massive, meticulous The Resurrection of the Son of God. Crucial to understanding Wright is his attempt to avoid an anachronistic approach that brings a modern fundamentalist hermeneutic to the text, and to read the text out of a hermeneutic that strives to be faithful to the time it was written and read.

I'm on p. 607, where Wright devotes some time to "the strange presence of women in the [resurrection] stories." Wright states: "It is, frankly, impossible to imagine that they were inserted into the tradition after Paul's day... Even if we suppose that mark made up most of his material, and did so some time in the late 60s at the earliest, it will not do to have him, or anyone else at that stage, making up a would-be apologetic legend about an empty tomb and having women be the ones to find it." One needs to appreciate the full impact of the point that "women were simply not acceptable as legal witnesses." (607)

Far better it would have been to have "fine, upstanding, reliable male witnesses being first at the tomb." (608) Critics of Christianity, as Origin and Celsus note, would have picked up on the story of the women and scoffed and the whole thing. Wright asks: "Would the other evangelists have been so slavishly foolish as to copy the story unless they were convinced that, despite being an apologetic liability, it was historically trustworthy?" (608)

Wright argues that this story "goes back behind Paul, back to the very early period, before anyone had the time to thnk, 'It would be good to tell stories about Jesus rising from the dead; what will best serve our apologetic needs?' It is far, far easier to assume that the women were there at the beginning, just as, three days earlier, they had been there at the end." (608)

A final note: all historical reasoning is inductive, probableistic. Therefore doubts can be raised. The raising of doubts in historical reasoning is to be expected. One can always find something to wonder about. Yet in this case it is more probable that the women were at the tomb than that this story was a later, made-up addition.
Posted by John Piippo at 12:52 PM