Either God Or the Wilderness of Neurosis 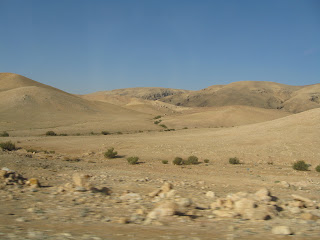 (Desert wilderness between the Dead Sea and Jerusalem)

Thomas Merton wrote: "The whole mechanism of modern life is geared for a flight from God and from the spirit into the wilderness of neurosis. Even our monasteries are not free from the smell and clatter of our world." (No Man Is an Island, 109)

Let's define the word "world," Merton-like, as: "the wilderness of neurosis." Now, we need to define "neurosis," which leads me right into some real-world neurotic behavior. If "neurosis" has to do with "delusion," then one of this world's delusions is the idea that we are really smart people because we can use the internet to find the meanings of words like "neurosis" and then post them on our web page. Let me now confess: if you caught me in public without my computer and asked me to define "neurosis" I would probably say a few things that would not sound so intelligent. I'd wonder if the word was even in use today, or of any use in psychiatry at all?

Now I'm looking at a book called Neurosis and Modernity: The Age of Nervousness in Sweden, by Petteri Pietikäinen. That's a Finnish name, which gives me some comfort. Perhaps Pietikäinen is a Finn trying to prevent Swedish nervousness (an oxymoron?) from crossing the border into Finland? He writes that "in twentieth century psychiatry "neurosis was a generic term for milder mental afflictions [than "psychosis"], such as neurasthenia, psychogenic depression and psychoneurosis." (2) Not much help here! But it looks like Pietikäinen tells us that "neurosis" is today not a helpful word in diagnosing patients. (cf. p. 5) "What today are called depression, anxiety, phobias, post-traumatic stress disorder, anorexia nervosa and obsessive-compulsive disorder were once labeled as neuroses." (2)

So what did Merton mean by "neurosis?" Probably what Freud meant by it. Judy Jones and William Wilson, in An Incomplete Education (another book I've never read before, but I'm in research mode now), write: "Somebody - was it Freud or one's freshman-year roommate? - defined a neurotic as a person who could neither love nor work, but who was still, nine days out of ten, able to get around. In other words, whatever trouble he or she may be having with unresolved anxiety, guilt, or revulsion, a neurotic remains capable of coherent speech, good manners, tasteful outfits, and what psychologists... call reality-testing." (418) That's nice, and unsettling. The neurotic, though appearing outwardly "normal," is living in a big-time delusion about his own self. Welcome to Zombieland.

Now watch this. Jones and Wilson write: "As Freud once sighed, 'Today, neuroses takes the place of monasteries, which used to be the refuge of all whom life had disappointed or who felt too weak to face it." Aha! I am now an archaeologist who has found a missing link between Merton's monastic life and Freudian neurotic life! Using "world" in the sense in which Jesus used it in John 17, our world is an environment conducive to unreflected-on living, the life of the facade, what Merton in many places calls "the false self." The monastery, originally thought to be the gateway to God's presence and, hence, reality as introduction to the "true self," has itself taken on neurotic forms. Instead of being Spirit-led, even monastic life can be world-led and unreal, robotic, with the outward appearance of a life of prayer and God-relationship but without the substance or glory of God.

Churches can be this way. ("Church" = a movement of people [no "church building" required] who follow after Jesus and engage in his redemptive activity.) Individual Jesus-followers can be this way. In God's Kingdom there is authenticity and transparency; in this world there is metaphysical cosmetology; viz., a noetic framework set up to cover over the kosmos. When Paul writes in Romans 12:1-2 that we take care so as not to let this world shape us into its mold, it means: Protect me from re-entering the wilderness of neurosis from which I have been set free.
Posted by John Piippo at 2:32 PM