Jesus Was Not a Capitalist (or Socialist, Marxist, etc-ist...) 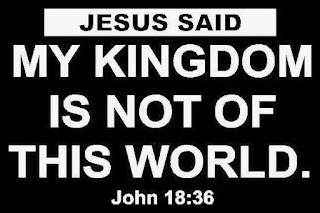 I am not entirely free from the love of money. That's not good. Not, at least, from Jesus' POV.

As I have been preaching in our church, for over four years, through the four gospels chronologically, the issue of money comes up. Not because we're trying to get more money from more people, but because Jesus, the Real Jesus, talks about money. He does this a lot. It makes us all uncomfortable. Imagine where that leaves me, "preaching" as best as I can the truth about Jesus?

I have found that some Christians don't like it when we simply read the words Jesus says about money, because they think Jesus was an American capitalist. He wasn't. Let me boldly proclaim this truth: Jesus was not a capitalist. He did not "capitalize" on anything he did or said. He refused to become a "brand name." He didn't sell "Jesus Tour" t-shirts with words like "Nazareth, Tiberias, Korazin, Bethany, and Golgotha" on the back. Captialism was not even around when Jesus walked the earth! So, of course Jesus was not a "capitalist." He wasn't even an entrepreneur. Note that Jesus was also not a Marxist or a Communist or a Republican or a Democrat or a Maoist or a Socialist or a Whateverist. Jesus identifies no with earthly ideology.

Actually, Satan tempted Jesus to become an entrepreneur. See the temptation in the wilderness for that one. And at one point, after Jesus fed the 5,000, the people rushed him wanting to make him King. Jesus refused the earthly king-thing and retreated to go alone to pray.

Is "capitalism" bad? That is not the issue. Jesus never came to evaluate and prop up earthly political systems. In John 18:36 we read Jesus saying, "My kingdom is not of this world." That being the case, Jesus is not ipso facto applauding one political system over another precisely because what is really needed is a different kind of kingdom. Even if capitalism is better than other systems, it would still only be the best that humans can produce. And it's easy to see that it's not good enough. There are many poor people today in America. Read the four gospels to see how Jesus really feels about that.

When Jesus gave the rich ruler in Luke 18 the good news that he could have treasure in heaven if he fully downsized on earth and gave to the poor, the ruler became sad. Jesus then says, famously: "How hard it is for the rich to enter the kingdom of God! Indeed, it is easier for a camel to go through the eye of a needle than for a rich man to enter the kingdom of God." Earthly up-sizing makes it near-impossible to come under the rule and reign of God.

So we tell people this, and declare it "good news." Some are sad to hear it. Some get mad when we quote Jesus as saying it.  Some go looking for a church that doesn't talk about the Real Jesus. We get accused of being anti-capitalists. To which we respond, "But this is Jesus, not me, saying this!"

I do know followers of Jesus who make money, a lot of it, but do not love it. One sign of their increasing non-emamorment with money is their increasing giving to redemptive activity. Personally, I have see many examples of lavish, anonymous pouring-out of resources to rescue needy people from oppression and hopelessness. I look at these people and thank God for who he is in them. It's a constant process and adventure of Spirit-led material-downsizing for the effect of Kingdom-upbuilding.

For me the "love of money" thing is not connected with age. I've met old people who see every situation and person as yet another opportunity to capitalize on it for the benefit of their sand-foundation earthly kingdom. I've met old people who have instead grown more and more in love with Jesus and his kingdom, which means, logically, their earthly kingdoms keep getting downsized to the benefit of the people Jesus called "the least of these." (Matthew 25) As a pastor I have been at the bedside of both types as they are dying. I have seen the person dying while still in the kingdom of earth; I have seen the person dying while in the kingdom of heaven. The differences between the two, in such moments, are clear.

So I conclude: Jesus was right. Don't save your treasures up on earth, where moth and rust corrupt. But store up treasure in heaven, where no thief can enter and steal. Let the Spirit lead you to use all you have been given for the sake of redeeming people that Jesus died for.
Posted by John Piippo at 1:40 PM