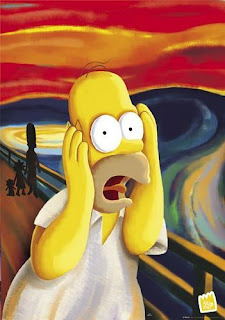 (An adherent of naturalistic epistemology?)

I am nearly finished with William Dembski's The End of Christianity. It really is a tremendous, even brilliant, book on the problem of evil. Demski reasons that the classical theological idea that even natural evil is a result of the Fall makes sense if it can be shown that present actions can causally affect past events. Dembski holds to a very old earth. This means that, prior to Adam and Eve, natural evil already existed. If even natural evil is a consequence of the Fall, how can this make sense? Dembski explains the logic of choices acting retroactively. I find it eminently logical, very persuasive, and quite helpful.

Within Dembski's broad argument there are many profound insights. Here's some stuff about the saelf-referential incoherence of naturalism.

How is knowledge of the world possible at all? "Why should what goes on inside our heads have any rational connection with what goes on in the world?" (104) Dembski writes, following Alvin Plantinga and I think Victor Reppert, that "within a naturalistic worldview, no solution exists at this level." (Ib.) At this point he quotes G.K. Chesterton:

"Reason is itself a matter of faith. It is an act of faith to assert that our thoughts have any relation to reality at all. If you are merely a sceptic, you must sooner or later ask yourself the question, "Why should anything go right, even observation and deduction? Why should not good logic be as misleading as bad logic? They are both movements in the brain of a bewildered ape?" The young sceptic says, 'I have a right to think for myself.' But the old sceptic, the complete sceptic, says, 'I have no right to think for myself. I have no right to think at all."

This is one of the problems Alvin Plantinga finds with evolutionary non-teleological naturalism. See his "An Evolutionary Argument Against Naturalism."

Note also Michael Ruse's recent "Philosophers Rip Darwin." One of the three philosophers Ruse attacks is Plantinga (the other two being atheistic philosophers Thomas Nagel and Jerry Fodor, both of whom have problems with Darwin). But Ruse says nothing substantial about Plantinga, simply stating that Plantinga has supported Intelligent Design theory. In doing so little Ruse misses Plantinga's substantial efforts to show naturalistic epistemology as self-referentially incoherent.
Posted by John Piippo at 4:57 PM