The Humanities Are Morphing Into Neuroscience 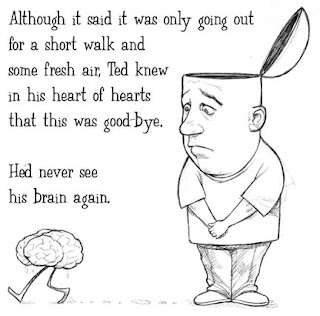 Need a job in the future? Become a neuroscientist. Because all things sociological, psychological, philosophical, and theological are morphing into the neurological. The social ramifications of this are huge. Consider, e.g., issues of law and ethics. What is the nature of "responsibility" if persons don't have free will?

An example of this is USA Today's little article "Who Killed John Lennon? Science Looks At the Brain and the Law." Who killed John Lennon - the person or the brain? Is there such a thing as a "person" apart from the brain.

Psychologist Michael Gazzaniga asks "whether brain scans be accepted in court. What's the veracity of eyewitness testimony? Do we need to revisit the 166-year-old definition of the insanity defense, given what we're learning now about free will and culpability?"

Gazzaniga's view, as is the view of some neuroscientists, "is that the brain acquires information and makes decisions well before we are consciously forming choices. Gazzaniga says, "We're all on a little bit of taped delay between unconsciousness and awareness. But none of us believe it. We think we are in charge.""

If we are not in charge, who or what is? Answer: the brain.

With those words a universe of questions, problems, and controversies arises. If decision-making is fully reducible to neural matter than is anyone (whoever "anyone" might be) ever responsible for anything? Why punish someone for something their "brain" did, but "they" did not do (because there is no "they")? Consider intra-neuroscientific controversies, such as illustrated in the book Neuroscience and Philosophy, where Maxwell Bennett and Peter Hacker accuse Daniel Dennett and John Searle of committing the "mereological fallacy" when they equate the "mind" with the physical brain.


George Orwell would have loved all of this. Or at least, his brain would love it.
Posted by John Piippo at 1:20 AM