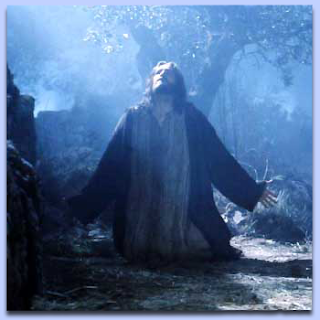 In Mark 14 Jesus, agonizing in the Garden of Gethsemane on the Mount of Olives, addresses the Father as "Abba." “Abba” is not “Daddy,” if that means in some childish sense. “Abba” is an intimate family word. R. T. France says it means “the respectful intimacy of a son in a patriarchal family.” (France, Mark, 584)

No Jew prior to Jesus had addressed the Father so intimately. Ben Witherington states that this implies “a filial consciousness on the part of Jesus that involved a degree of intimacy with God unlike anything we know of in Judaism prior to Jesus’ day. So far as we can tell from our limited evidence, no one had previously addressed God as abba.” (Witherington, Christology of Jesus, 220) Witherington adds: “Jesus saw himself as the unique mediator of a relationship with the Father that could express itself by using the intimate term abba.” (Ib.)

"Abba" is Trinitarian perichoretic-union language, a word of intimate union. A unitive family word. Jesus the Son is "in" the Father, and the Father is "in" him. So where does that leave us? Looking through the outside window at the family dance of the Trinity? No. Remember that, in John 14-16, Abba comes to make his home in us. In you, if you are a Jesus-lover.

This is huge. So huge that Paul writes, in Romans 8:15: "For you did not receive a spirit that makes you a slave again to fear, but you received the Spirit of sonship. And by him we cry, "Abba, Father."" R.T. France explains: “Paul introduces ‘Abba’ as the sign of an amazing and hitherto inadmissible relationship of the individual believer with God.” (France, Mark, 584)

***
I have read Amy-Jill Levine's interpretation of "Abba" in her book The Misunderstood Jew. Levine says this:

Levine provides no evidence that, prior to Jesus, Jews addressed God as 'Abba.' If it means just the same thing as 'Father' then she seems to think using the Aramiac word is no big deal. Witherington, who applauds Levine's work on the back of the book jacket, seem to believe that 'Abba' is more intimate, as indicated from the quote I used above.

Levine thinks Jesus' use of 'Abba" "has a political edge." (Ib., 44) She writes: "The Caesars on the throne in Rome were called "Father" - as Washington was called "father of our country" or as the Russian czars by their populations (with relative degrees of warmth) "little father"... By speaking of the "Father in heaven," Jesus also insists that Rome is not the "true" father." (Ib., 44-45)

The issue, as it seems to me, is even if God is addressed in Second Temple Judaism as "Father": 1) was God addressed as 'Abba,' and if so, then 2) is 'Abba' a more intimate familial address?
Posted by John Piippo at 8:22 PM