Asking the Nonscientific Question About the Nature of 'Science' 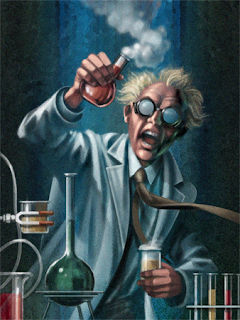 ("Mad scientist": someone who does science without knowing what 'science' is.)

NYU physicist Alan Sokal likes to consider the big questions. In an interview in The Philosophers' Magazine with Julian Baggini Sokal says: "I always took an attitude towards physics where I was interested in the fundamental conceptual questions, closer to Einstein’s approach than Feynman’s."

Sokal asks questions like, "What does quantum mechanics actually mean?" He says, "I’ve been using quantum mechanics for about 35 years, almost three-quarters of my life, and the more I study it the less I understand it. So I can understand why a whole generation of physicists threw their hands up in despair and said ‘let’s just calculate’, but that’s not to me a satisfactory final answer.”"

That kind of questioning brings us into the arena of philosophy. The answer to the question "What is quantum mechanics?" cannot be answered within quantum mechanics. It's a more fundamental question, the kind dealt with in the philosophy of science. Most physicists are not equipped to deal with these questions, being untrained in philosophy.

Sokal: “I think there is also something in physicists’ complaints about philosophers that often what they do is so sterile that it’s of virtually no relevance to any working scientist, even at the level of conceptually clarifying important things in their fields.” So, then, of what use is conceptual clarification? Sokals reasons like this.

Sokal admits that it's hard to pinpoint just if and how philosophers have contributed to physics. Yet he cannot believe that philosophy of science contributes nothing. I am thankful for Sokal's turning to the big questions. One good read for me recently has been Del Ratzsch's  Science & Its Limits: The Natural Sciences in Christian Perspective. I strongly recommend this text as an intro to the big questions, like "What is 'science,' anyway?"
Posted by John Piippo at 8:12 AM