The Shady Beginnings of Yoga in America 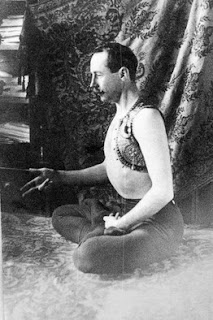 "Today yoga flourishes even in the *Great Oom's home state of Iowa, and the yoga industrial complex has broadened to include magazines, books, clothing and celebrity followers. Eager students can study Christian yoga (or "Yahweh Yoga," as it is sometimes called) and Jewish Yoga, where students replace "om" with "shalom." What was once exotic is now simply part of America's multicultural mix."

*One of yoga's earliest promoters, Pierre Bernard—known as the "Great Oom."

Read about the shady beginnings of yoga in America, in the Wall Street Journal here.
Posted by John Piippo at 11:27 AM