Science & Religion Need Not Be "At War" 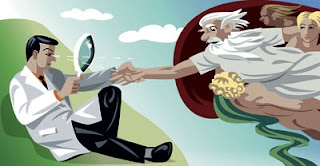 Mano Singham has written an essay "The New War Between Science and Religion" in the recent Chronicle of Higher Education. Singham admits to being one of the "new atheists," and writes from a scientistic, philosophical naturalist perspective.

The "old war," Singham says, was between evolutionists and anti-evolutionists. The new war is between philosophical naturalists and accommodationists. Accommodationists seek "to carve out areas of knowledge that are off-limits to science, arguing that certain fundamental features of the world—such as the Heisenberg uncertainty principle and the origin of the universe—allow for God to act in ways that cannot be detected using the methods of science." For example, biologist Francis Collins, former head of the Human Genome Project, and now head of the National Institutes of Health. Accommodationists suggest that suggest that "there are deeply mysterious, spiritual domains of human experience, such as morality, mind, and consciousness, for which only religion can provide deep insights."

I think Singham gets some things quite wrong in his essay. Here are some examples.

2. Singham writes: "There is no evidence that consciousness and mind arise from anything other than the workings of the physical brain." But there is "evidence." See, e.g., University of Texas philosopher Robert Koons's recent edited volume The Waning of Materialism. Start with this book, and the evidence and arguments presented, and it will lead you into a world of disagreement with Singham's position. Add to this the "hard problem" of first person subjective consciousness, and the intractable problems the philosophical naturalist faces in trying to explain this.

3. Singham writes: "The powerful appeal of religion comes precisely from its claims that the deity intervenes in the physical world, in response to prayers and such, religious claims, too, fall well within the domain of science. The only deity that science can say nothing about is a deity who does nothing at all." Singham is forced to say this out of his philosophical naturalism. It functions, for him, as an article of faith. Meanwhile there are those of us who believe there is a God who responds to our prayers. And, e.g., I have collaborated a bit with two scholars who will soon be publishing research on divine healing and its empirical verification. Here I think worldview issues are important in that one's worldview provides the hermeneutic grounds for interpreting "facts," none of which can be accessed "objectively." "Objectivity" is a function of a noetic framework. Singham has no argument here; he simply tells us what he believes.

4. #2 above explains, for me, Singham's idea that "the fact that some scientists are religious is not evidence of the compatibility of science and religion." He quotes Michael Shermer, who says: "Smart people believe weird things because they are skilled at defending beliefs they arrived at for non-smart reasons." If it were only that simple! Of course it is "weird" for a naturalist to believe in a God who, for example, answers prayers. So? Nothing else follows from this, except to say that the noetic framework of some scientists is religious, while Singham's is atheistic. I find Singham's writing here simply a form of atheistic confessionalism.

5. Singham's next claim is so astounding and baffling I just don't know what to do with it. He writes: "Accommodationists frequently brand us new atheists as "extreme," "uncivil," "rude," and responsible for setting a "bad tone." However, those accusations are rarely accompanied by concrete examples of such impolite speech. Behind the charges seems to lie the assumption that it is rude to even question religious beliefs or to challenge the point of view of the accommodationists. Apparently the polite thing to do is keep quiet." Amazing...  Let's define "rude," logically, as the use of ad hominemn abusives. Then, read The God Delusion for starters. Case closed. But there's more. There's a universe of critical literature that not only shows Dawkins's philosophical ignorance on display but his over-bearing name-calling. Add to this the idea that few philosophical theists are suggesting that their critics "keep quiet." Finally, Singham uses a quote from Dawkins, where he refers to accommodationists like Francis Collins as "cowards." Surely that's not the use of logic and reason to approach one's challengers? Apparently Singham thinks people like Francis Collins should simply keep quiet, and he refers to Collins et. al. as "cowards" to intimidate them.

6. Singham concludes with: "If we concede without argument that mainstream religious beliefs are compatible with science, how can we argue that witchcraft and astrology are not?" With we see that Singham was correct when he referred to himself as a "new atheist." For this is part of the new atheist political-rhetorical game. It's a beautiful example of the "slippery slope" fallacy. Does belief in Christian theism commit one then to believe in witchcraft and astrology? Of course not. Singham here shows his unfamiliarity with the literature, and sounds too much like Richard Dawkins.
Posted by John Piippo at 9:29 AM