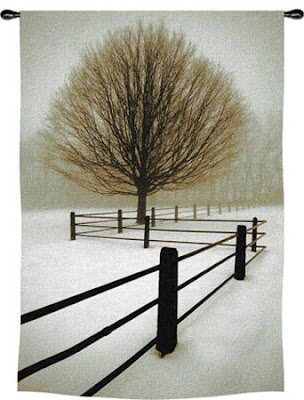 (Linda and I have this photograph by David Winston, called "Solitude")

"There are men dedicated to God whose lives are full of restlessness and who have no real desire to be alone. Interior solitude is impossible for them. They fear it. They do everything they can to escape it. What is worse, they try to draw everyone else into activities as senseless and as devouring as their own. They are great promoters of useless work. They love to organize meetings and banquets and conferences and lectures. They print circulars, write letters, talk for hours on the telephone in order that they might gather a hundred people in a large room where they will all fill the air with smoke and make a great deal of noise and roar at one another and clap their hands and stagger home at last, patting one another on the back with the assurance that they have all done great things to spread the Kingdom of God."

Sadly, I have not only attended many such meetings but have organized some of them. But not so anymore, at least as regards organizing them. I feel myself wanting more organizational leanness so that what time God has given me can be more effectively used for his Kingdom and its advancement. This includes using the strengths and gifts I have as the Spirit leads. It's the "as the Spirit leads" thing that is crucial here, because being-directed and led by the Spirit requires much alone-time with God. There is simply no substitute for it. And, BTW, Jesus did it. If Jesus needed alone-time with the Father to discern what the Father wanted him to do, who do we think we are not to spend much time in solitude?

So we had another meeting. What's the Kingdom-doing it led to, if any? That is the bottom line. Do we need to have a meeting? Or, better put, does God want us to have a meeting? If so, then meet. If not, then don't. Another meeting just for the sake of meeting has an illogical circularity about it that creates interior nothingness.

Much time spent alone with God in a focused way brings the fruit of relevant doing for God's sake and his Kingdom.
Posted by John Piippo at 6:18 AM