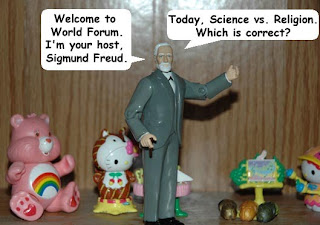 I have a big-time backlog of books on my shelf to be read.

That being said, I WANT ANOTHER BOOK! I want to read Science vs Religion: What Scientists Really Think, by Elaine Howard Ecklund. Ecklund surveyed 1700 scientists and interviewed 275 of them. "She finds that most of what we believe about the faith lives of elite scientists is wrong. Nearly 50 percent of them are religious. Many others are what she calls "spiritual entrepreneurs," seeking creative ways to work with the tensions between science and faith outside the constraints of traditional religion. The book centers around vivid portraits of 10 representative men and women working in the natural and social sciences at top American research universities." (amazon.com)
Posted by John Piippo at 8:57 PM