Why Multitasking Screws Up the God-Relationship 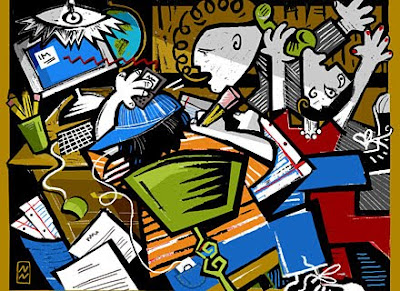 
In our culture multitasking is often worn as a badge of honor, as some kind of great ability that makes some better than others. The multitasker claims multiple levels of excellence. For example, my father had the ability, especially on Sunday afternoons, to simultaneously sit in the recliner, read the paper, watch TV, and sleep. One had better not change channels because he would say "Hey, I was watching that."
Imagine myself being attracted to Linda. I ask her out for a date. The date includes me getting some other things done. So we go to the nice restaurant and I pull out my laptop. I've got a work project going, I'm checking my e-mails, I'm carrying on multiple relationships on Facebook and Twitter, playing Gears of War, while "being with" Linda. Could I do this? Try me! Would Linda go out with me again? No. Not her, at least. Nor should she, I am certain.
What about God? Can't we pray while we shop? Of course. But it's instructive to note that no one, in the Bible or in the history of Christian spirituality, prayed that way. (Note: yes, Brother Lawrence prayed while washing dishes, but one must remember that he lived in a monastery which called him to solitary prayer hours each day after day after day. No wonder he was still in prayer while he worked!)
Now there is evidence that mulitasking may be harmful. Today's CNN report states that multitaskers...
We live in a world that is bloated with irrelevant information that produces shallow people who are increasingly unable, not only to know what is really important, but when they discover it will find it hard to attend to.
I'm sitting on my back porch, no phone round, watching the marvel of my hummingbird who feeds here. This bird that can fly backwards and hover makes me think of God. Needed to really see this are: patience, waiting, and childlike wondering, none of which fit with multitasking. Compared to this experience "McWondering" falls way short.
Posted by John Piippo at 6:49 AM