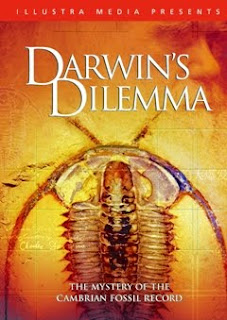 It's Memorial Day. I've been outside doing lawn care. We live on 3 1/2 acres and there's a lot to do. I love being outside on the lawn mower, and trimming and cutting. It's warm, sunny, and the back of my wooded property is mosquito world.

I'm taking breaks and watching the dvd "Darwin's Dilemma." You can watch the whole thing on Youtube here.

"Darwin’s Dilemma explores one of the great mysteries in the history of life: The geologically-sudden appearance of dozens of major complex animal types in the fossil record without any trace of the gradual transitional steps Charles Darwin had envisioned 150 years ago.

Darwin’s Dilemma recreates the prehistoric world of the Cambrian era with state-of-the-art computer animation, and the film features interviews with numerous scientists, including leading evolutionary paleontologists Simon Conway Morris of Cambridge University and James Valentine of the University of California at Berkeley, marine biologist Paul Chien of the University of San Francisco, and evolutionary biologist Richard Sternberg, a Research Collaborator at the National Museum of Natural History."
Posted by John Piippo at 10:44 AM