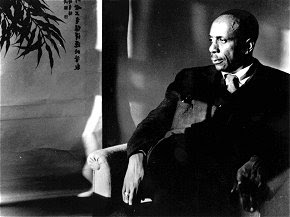 I am slow-reading Howard Thurman's Jesus and the Disinherited. Chapter 1 is "Jesus: An Interpretation." This book was written in 1949, when blacks in America lived as an oppressed people. Much like Jesus and the Jews of his time did when under the Roman occupation. Thurman's task is one of exploring and explaining "what the teachings of Jesus have to say to those who stand at a moment in human history with their backs against the wall... the poor, the disinherited, the dispossessed." (From the "Foreword")

When a people is poor, disinherited, and dispossessed there is little time for abstract philosophizing and high theologizing. While it is true that Jesus gives us plenty to big-time-theologize and even speculate about, Jesus himself does not save and redeem people through mental abstactions. He is profound, no doubt. But his profundity does not save us, he does.

Put a bit differently, if you and I were currently in captivity we'd expend all thought and prayer towards our release. We would have neither time nor desire to analyze things like postmodernism, poststructuralism, or Derrida-ism. Arguments for or against the existence of God would be placed on the shelf, and the philosophical problem of evil would have morphed into the existential encounter with evil.

Thurman writes: "I do not ignore the theological and metaphysical interpretation of the Christian doctrine of salvation. But the underprivileged everywhere have long since abandoned any hope that this type of salvation deals with the crucial issues by which their days are turned into despair without consolation. The basic fact is that Christianity as it was born in the mind of this Jewish teacher and thinker appears as a technique of survival for the oppressed... Wherever his spirit appears, the oppressed gather fresh courage; for he announced the good news that fear, hypocrisy, and hatred, the three hounds of hell that track the trail of the disinherited, need have no dominion over them."

Thurman's theologizing is all about liberating the oppressed and setting captives free. Sounds like the Real Jesus to me!

What place is there for all the abstract arguments I and others engage in? Thurman reasons that we who talk and write about them are, like the apostle Paul, free men and women. When you are free and unoppressed you have the luxury of sitting in coffee shops and philosophizing. Historically, the free and the unoppressed preachers tend to preach out of the apostle Paul. But those preaching to the disinherited preach out of the Psalms, Job, the Prophets, the Exodus-event, and the Gospels. I suggest that we have, in America, an orphanization and marginalization now happening such that we need to spend a few decades preaching out of the Gospels.

Thurman does not dismiss the letters of Paul, but finds that rich, powerful people tend to prefer Paul while poor, captive-people prefer the Jesus of the Gospels. I think Thurman's point is a good one, and it explains why he writes the way he writes. When an evil empire holds you and all those whom you love in chains, what's needed is Jesus as Liberator more than Paul as Theologian. That's how it was if you were black in America in 1949.
Posted by John Piippo at 10:29 PM