Ernie Harwell & the Power of Humility 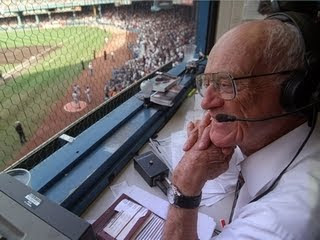 Albom writes that among Harwell's achievements included personal dissatisfaction with his life in the 1960s that brought him to a Billy Graham crusade where he became a devout follower of Jesus. Throughout his life Ernie's ego decreased, while Christ in him increased. Albom writes: "I can tell you that whenever a new sportswriter or broadcaster came to town, Ernie would greet him as if we were lucky to have him. He never played the kingpin. Never acted like a boss checking out the new kid. Not with journalists. Not with players. He made humility his calling card, he shook hands and drawled, "Welcome to the Tigahs" or "Good to have ya here," and it usually would be someone else who would nudge the new guy and say, "Do you know who that is? That's Ernie Harwell. THE Ernie Harwell.""

I love and admire and honor the fact that Ernie loved his wife Lulu. "For 68 years, they were together, acting like kids on their first date. The last time I saw them both, a few months back, in his modest residence at a senior center in Novi, he said, "Lulu, how about some of that butter pecan ice cream?" And she brought us some and we ate it together. I don't know why I remember that line. "How about some of that butter pecan ice cream?" It was just so innocent, so happy, a man in his 90s, asking for a treat. I don't even eat ice cream. I ate it that night."

People loved Ernie Harwell because Ernie Harwell loved and honored people above his own self. You've got to be a free person inside to be able to do that. Albom says: "An outsider may wonder why so many fans today are singing Ernie's praises, but it was largely because he never sang his own. In a sport full of big egos, Ernie's was invisible." The freedom of personal invisibility. It's rare.
Posted by John Piippo at 4:58 PM