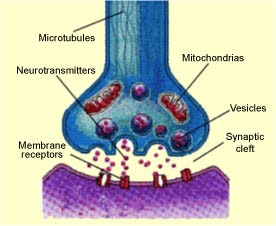 Nicholas Carr, in The Shallows, will need to go into the physiology of the human brain if he hopes to substantiate his thesis that the medium of the Internet (like Nietzsche's typewriter) alters that physiology. Carr writes:

"Neurons have central cores, or somas, which carry out the functions common to all cells, but they also have two kinds of tentacle-like appendages - axons and dendrites - that transmit and receive electric pulses. When a neuron is active, a pulse flows from the soma to the tip of the axon, where it triggers the release of chemicals called neurotransmitters. The neurotransmitters... flow across the synapse... and attach themselves to a dendrite of a neighboring neuron, triggering (or suppressing) a new electric pulse in that cell. It's through the flow of neurotransmitters across synapses that neurons communicate with one another, directing the transmission of eleectrical signals along complex cellular pathways. Thoughts, memories, emotions - all emerge from the elctrochemical interactions of neurons, mediated by synapses." (emphasis mine)

It's that little word "emerge" that I am especially interested in. I don't know if Carr will do anything with this; probably not. "Thoughts" as "emergent properties" of the physical brain, as "qualia" - that's interesting, and problematic on physicalism. That's a rabbit trail that's become, for many today, a superhighway.
Posted by John Piippo at 1:43 PM