Anne Rice Stays With Christ But Quits Being a Christian 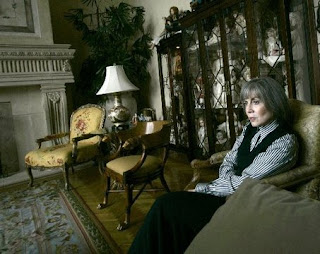 The headline at cnn.com says "Anne Rice Leaves Christianity." This is misleading, since she says:

“My faith in Christ is central to my life. My conversion from a pessimistic atheist lost in a world I didn't understand, to an optimistic believer in a universe created and sustained by a loving God is crucial to me. But following Christ does not mean following His followers. Christ is infinitely more important than Christianity and always will be, no matter what Christianity is, has been or might become.”

“For those who care, and I understand if you don't: Today I quit being a Christian ... It's simply impossible for me to ‘belong’ to this quarrelsome, hostile, disputatious, and deservedly infamous group. For ten years, I've tried. I've failed. I'm an outsider. My conscience will allow nothing else.”

OK. She's no longer a Christian. But she has faith in Christ, and this faith is central to her life. She just can't handle being with "Christians." She refuses to be “anti-gay,” “anti-feminist," “anti-science” and “anti-Democrat.”

I'm glad she still loves Jesus. But Jesus has not abandoned his not-so-perfect followers. If she hangs with Jesus she needs to realize that Jesus spends time hanging with the rest of us "Christians." Has Jesus left Christianity? On that point I feel sure he's not pleased with some of it, in the sense that some or even a lot of what passes for "Christianity" today has no point of contact with the Jesus of the Gospels. But Jesus has not really left even the many "Christian non-Christians" and nominal Christians, but is in loving pursuit of them. If Rice follows after the Real Jesus then he's going to lead her, at times, to fake Christians, which he has not ceased to love. Because God is, as she has discovered, a "loving God." This all-loving God doesn't get put off by the imperfections of people, but dies on the cross for them, which includes for us since we are "them" too. It's instructive to note that Jesus, after being abandoned by all his original 12, calls for a meeting with them after he gets crucified and rises from the dead. They are abject failures yet remain objects of his love. Jesus' love did not allow him to remain an "outsider."
Posted by John Piippo at 12:44 AM