Black Hermeneutics & the Imaginative Use of Scripture 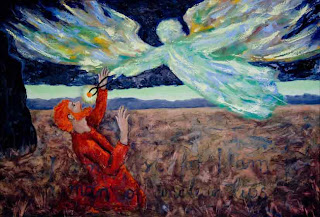 Tonight I read a brilliant essay by black New Testament scholar Thomas Hoyt, Jr., entitled "Interpreting Biblical Scholarship for the Black Church Tradition" (in Cain Hope Felder, ed., Stony the Road We Trod: African American Biblical Interpretation). As I read it the sermon I heard in May at "Fanning the Flame" by black biblical scholar and Palmer Theological Seminary President Wallace Charles Smith came flooding back into my mind. Smith spoke out of Isaiah 6, especially emphasizing the "live coal" the angel took from the altar of God and placed on Isaiah's lips. Smith's sermon is simply one of the most powerful and influential I have ever heard in my life. And this was in spite of the fact that he seemed to take some liberty (freedom) in interpreting Isaiah 6. My Eurocentric hermeneutical training used to get in the way of this kind of preaching. Hoyt's essay has now straightened all that out for me.

"Biblical writers were themselves interpreters," reasons Hoyt. "Writers in both testaments exercised a certain critical freedom in building upon traditions that they received." (17) Scripture can be used "imaginatively" since, within Scripture, there is the imaginative use of Scripture. Hoyt writes: "To use the imagination means that we must allow the verbal images of the text to evoke mental images in the interpreter and the hearer. The black preacher was and is a master of this use of Scripture." (34) Oh yeah. Like Wallace Charles Smith, for me and many others.

I love how Hoyt describes his uneducated preacher father. He writes: "My father, who was a minister in the Christian Methodist Episcopal Church for over thirty-five years, did not have a seminary education, but had a basic love for Scripture and could tell the biblical stories in such a way that one would walk around in the images and find oneself caught up in the events of the Bible. He would often say, 'In my mind of imagination, I can see...' The intent was to evoke a picture that corresponded to what the text said. The preacher is especially called upon to use imagination in interpreting Scripture. For the congregation, Scriptures come to life through the images used by the preacher." (34-35)

When Wallace Smith preached about Isaiah in the temple it was as if I was in the temple with him, and the angel touched by lips and even the depths of my heart with a live coal. In fact, as I see it, God came that night and touched my soul with a live coal, and in somes ways I will never be the same again.
Posted by John Piippo at 11:51 PM