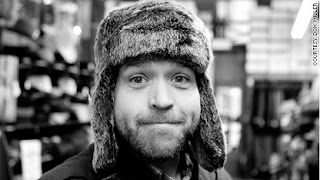 Cnn.com has a nice article on "Blue Like Jazz" author Donald Miller. Miller talks about  "the best sermon he ever heard," which was the life of a not-famous Jesus-follower named David Gentiles. "David Gentiles didn't look the part. He wore work boots, drove a creaky Ford pickup and wore a chewed-up Cleveland Indians baseball cap more than he wore pastor's robes. A Cajun from Louisiana, Gentiles stood only 5-foot-5 but he loved big hugs, laughed loudly and cried openly. Gentiles, Miller said, "taught me more about Jesus than anybody I knew.""

To be honest, I think that mostly this is how things are when it comes to actual Christianity. The un-famous Jesus-followers of the world are the real influencers of people. May Miller himself, along with myself, fade into anonymity and descend into greatness.

The article tells what happened when Miller met his biological father for the first time. And how Gentiles became a real father to him.
Posted by John Piippo at 9:33 AM