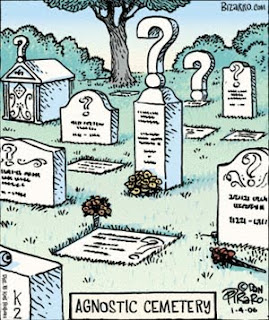 Here's some thoughts on Ron Rosenbaum's An Agnostic Manifesto: At least we know what we don't know.

Agnosticism is, says Rosenbaum, "radical skepticism, doubt in the possibility of certainty, opposition to the unwarranted certainties that atheism and theism offer." So an agnostic is skeptical not only of religious claims but also of atheistic claims. The New Atheists have an epistemic certainty about them that Rosenbaum the agnostic rejects. (Note: I have read some non-philosophically astute atheists who easily and fallaciously include agnostics in their number so as to inflate their meager numbers.)

"It's time," says Rosenbaum, "for a new agnosticism, one that takes on the New Atheists. Indeed agnostics see atheism as "a theism"—as much a faith-based creed as the most orthodox of the religious variety." Rosenbaum the agnostic is coming against "faith-based atheism." To explain: "Atheists display a credulous and childlike faith, worship a certainty as yet unsupported by evidence—the certainty that they can or will be able to explain how and why the universe came into existence. (And some of them can behave as intolerantly to heretics who deviate from their unproven orthodoxy as the most unbending religious Inquisitor.)"

The faith-filled New Atheist demonstrates his mighty leap of faith when he or she asserts that some day science will explain to us how something came from nothing. "Most seem never to consider that it may well be a philosophic, logical impossibility for something to create itself from nothing." Rosenbaum is unconvinced at atheistic stabs at solving this problem by positing a "multiverse" or  "vacuums filled with quantum potentialities." He counsels us to refrain from turning science into another religion "until it can show it has all the answers, which it hasn't, and probably never will."

Rosenbaum guffaws at "the brights." "The "brights" seem like rather dim bulbs when it comes to this question. It's amazing how the New Atheists boastfully stride over this pons asinorum as if it weren't there." I'll agree with Rosenbaum here. That a few non-philosophical (in the sense of the academy) atheists need to refer to themselves as "brights" is just funny. Especially since I know a few of them who are, when it comes to thinking "brightly" [logically], incoherent. (God loves them anyway.) (What Rosenbaum writes about pons asinorum is too funny for me to here quote.)

Rosenbaum the agnostic lays down the gauntlet with this challenge: "I challenge any atheist, New or old, to send me their answer to the question: "Why is there something rather than nothing?" I can't wait for the evasions to pour forth. Or even the evidence that this question ever could be answered by science and logic." Speaking as a theist I'd say: true, atheism cannot answer this question. But theism can. And that's another story, which I've posted about here before.

I found myself having a good feeling when Rosenbaum tipped his hat to David Berlinski's The Devil's Delusion, a good deal of which I agree with even though Berlinski is himself an agnostic. And Rosenbaum cites a recent essay by atheist/agnostic Paul Kurtz, who cites John Dewey as saying: "The aggressive atheist seems to have something in common with traditional superstition…. The exclusive preoccupation of both militant atheism and supernaturalism is with man in isolation from nature. [A Common Faith]"

1. Too much of the rhetoric and sociality is tribal: Us and Them."

2. [The New Atheism] presumes to know what it cannot. More on this below.

3. As a consequence of 1 and 2, it tries to co-opt Agnosticism as a form of "weak" Atheism. I think people have the right to self-identify as they choose, and I am neither an atheist nor a faith-booster, both charges having been made by atheists (sometimes the same atheists).

4. Knowability: We are all atheist about some things: Christians are Vishnu-atheists, I am a Thor-atheist, and so on. [Which is why the "are you agnostic about fairies?" rejoinder is just dumb.] But it is a long step from making existence claims about one thing (fairies, Thor) to a general denial of the existence of all possible deities. I do not think the god of, say John Paul II exists. But I cannot speak to the God of Leibniz. No evidence decides that.

5. But does that mean no *possible* evidence could decide it [existence or nonexistence of God]? That's a much harder argument to make. Huxley thought it was in principle Unknowable, but that's a side effect of too much German Romanticism in his tea. I can conceive of logically possible states of affairs in which a God is knowable, and I can conceive of cases in which it is certain that no God exists.

Rosenbaum reminds me a lot of Berlinski. He's witty and intelligent, and his essay is a good read. It confirms in me that, were I an atheist, I would not wish to be either a New Atheist or an ex-Christian Evangelistic Atheist (whose life purpose is to refute Christianity).
Posted by John Piippo at 10:55 PM