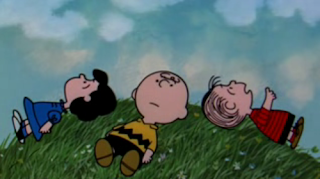 One of my favorite "Peanuts" cartoons is the one where Lucy, Charlie Brown, and Linus are lying on a hill looking up at the clouds. The dialogue goes like this.

Lucy: Aren't the clouds beautiful? They look like big balls of cotton. I could just lie here all day and watch them drift by. If you use your imagination, you can see lots of things in the cloud's formations. What do you think you see, Linus?


Linus: Well, those clouds up there look to me look like the map of the British Honduras on the Caribbean.

Linus: That cloud up there looks a little like the profile of Thomas Eakins, the famous painter and sculptor. And that group of clouds over there... [Linus points] ...gives me the impression of the Stoning of Stephen. I can see the Apostle Paul standing there to one side.

Lucy: Uh huh. That's very good. What do you see in the clouds, Charlie Brown?

Charlie Brown: Well... I was going to say I saw a duckie and a horsie, but I changed my mind.

In my preaching I see my challenge to include getting at the textual meaning as the original hearers or readers would have understood it. I don't want to "read in" to the text ("eisegesis"), but "read out" of the text ('exegesis").

For example, in current American culture the word "bad" is not necessarily a negative term. The sentence You were bad today cannot be immediately interpreted to mean Your behavior was immoral today. It could mean: You were really good today, since "bad" can mean, depending on the context, "good." Future interpreters of American culture will need to understand this distinction so as to not misinterpret 21st-century American texts.

I'm preaching out of 1 Corinthians 11:3-16 this coming Sunday at Redeemer. I cannot approach these difficult verses a-contextually. It's not a matter of what they mean to me. And I want to avoid reading my historical-cultural context into them. Consider v. 3: Now I want you to realize that the head of every man is Christ, and the head of the woman is man, and the head of Christ is God. The key word to understand here is "head." One way of interpreting it would be as "authority," or "in charge of," or "boss." Indeed, "head" has been interpreted that way. I think that is incorrect. Why?

Keener and Fee (et. al.) say that, in ancient Greek lexicons, "head" rarely meant "authority" or "boss." The more common meaning was "source," or "origin." One reason for preferring the more common interpretation here is that, if "head" meant "boss," then v. 3 reads: Now I want you to realize that the boss of every man is Christ, and the boss of the woman is man, and the boss of Christ is God. It would be especially unfortunate regarding the last phrase, and would commit the heresy known as "subordinationism." This interpretation would end up denying the classical idea of the Trinity (God as a three-personed being).

It seems clear that Paul wants to make a point by using "headship" temporally, as in "source of," like the "headwaters" of a river or stream is the place where the water in the river or stream originates. So in v. 12 Paul writes, For as woman came from man, so also man is born of woman. But everything comes from God.

(I realize that broader issues of textual interpretation come into play here. We can extend "text" beyond written texts. The matter of whether it's possible to get back into the "horizon of meaning" out of which a text originates is controversial. [See Gadamer's Truth and Method, e.g., and the possibility of Horizontsverschmelzung - "fusion of horizons." At one extreme lies Derridaean deconconstruction, which claims that we can not only get at original textual meanings but that they are unimportant.)
Posted by John Piippo at 2:54 PM