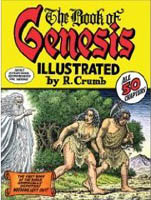 Here's a positive review of R. Crumb's The Book of Genesis Illustrated.  Leonard Greenspoon's (Creighton U.) review appears in Biblical Archaeology Review. Greenspoon, a Jewish scholar, appreciates what Crumb has left us with.

Second - another warning: the book of Genesis writes of illicit sexual acts. For example, from Genesis 19:

30 Lot and his two daughters left Zoar and settled in the mountains, for he was afraid to stay in Zoar. He and his two daughters lived in a cave. 31 One day the older daughter said to the younger, “Our father is old, and there is no man around here to give us children—as is the custom all over the earth. 32 Let’s get our father to drink wine and then sleep with him and preserve our family line through our father.”

Lot's daughters get their father drunk and then have sexual intercourse with him. They got pregnant by their father. Crumb illustrates this in his comic book.

Greenspoon says: "let’s give credit to Crumb: As advertised, he illustrates every verse of every chapter of the Book of Genesis. Along with exciting scenes of destruction (think Sodom and Gomorrah) and battle (as Abraham’s wars against the chieftains in chapter 14), there are the genealogies (chapters 5, 10 and elsewhere) with literally dozens of individuals mentioned about whom we hear little or nothing elsewhere. Through his illustrations, Crumb manages to provide a personality for each of these people, and his artistic vigor (it is said that he worked for about five years on this project) doesn’t flag as we move from Creation to Joseph’s death. I was drawn most to some of the telling details that Crumb presents that add an element of emotion to descriptions that might otherwise come across as rather flat."

Greenspoon concludes: "through his illustrations, Crumb has decidedly and positively enriched the way that I read the Book of Genesis when humans and their world are the subject. But for God, the creator, the destroyer, the covenant partner, Crumb has not appreciably enhanced my vision."

Note: John Shore reviews Crumb's Genesis at crosswalk.com. Shore writes: "I fail to understand how any Christian could not welcome this book. In it Crumb does not make fun of God, or Genesis, or ... anything. If I didn't know that Crumb was an agnostic, I wouldn't hesitate a moment to say that his "Genesis" is a faithful homage to that wondrous book of the Bible. Crumb's artistic style is an ideal match for the content of Genesis, so much of which is, after all, raw, lusty, and violent. (The cover of the book sports the warning, "Adult Supervision Recommended for Minors." Fair enough. None of its illustrations are disturbingly graphic, or anything--but it is Genesis.) His drawings look like the sort of work you'd expect an Old Testament prophet to produce."
Relevant Magazine's review is here.

Another note: This is not a book for children to sit down alone with. Perhaps they also should not get alone with Genesis 19?
Posted by John Piippo at 9:36 AM