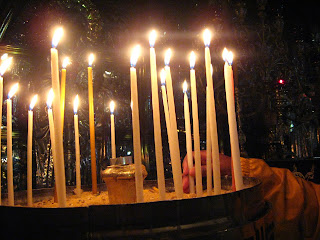 (Church of the Nativity, Jerusalem)

Was Jesus born on December 25? Probably not.

Was December 25 recognized as Jesus' birth because it was borrowed from pagan celebrations? Probably not. Christmas is not really a spinoff from pagan solar festivals.

How, then, has December 25 come to be associated with the birth of Jesus? The current issue of Biblical Archaeological Review has a theory. ("How December 25 Became Christmas")  The theory goes as follows.