Jesus and the F-word 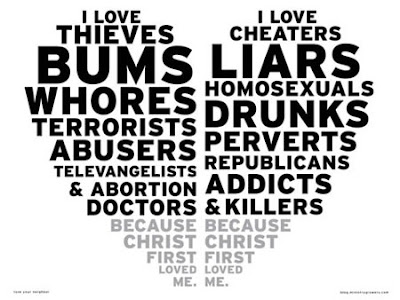 I love introducing people to the Real Jesus and his beautiful kingdom. I have met many people bound in the kingdom of darkness who curse and swear and use the f-word a lot. In fact, God has now, again, led me to people who want to talk yet swear all the time right in front of me. Does it bother me that they talk like this? No, not really. I have actually found some of them to be more real and authentic than some Christians I know. I find myself thinking, "This is the kind of person who could be a real Jesus-follower!"

In my BC-days every fourth word out of my mouth was the f-word. That's just the way I talked, and I thought nothing of it. Is every fourth word out of my mouth now the f-word? No. Why not? 1) Because Jesus doesn't talk like this; and 2) because in my culture it is mostly off-putting and will hinder people from listening to what I believe God wants to say to us (1 & 2 are probably related). While Jesus himself doesn't talk like this, Jesus loves people even if they talk like this. When someone says the f-word Jesus doesn't say "I'm outta here!"

The Mission is not: get people to stop swearing. The Real Mission is: witness to the sozo-ing work of Jesus in your life. Jesus isn't waiting for people to clean up their acts before he meets them. If that were true you and I would still be waiting to meet Jesus. I've been with "Christians" who get really offended when some non-Jesus-follower uses the f-word, and then see it as their divine mission to first clean out the mouths of these people before they love them. In fact, I've known "Christians" over the years who won't lift a finger to serve in God's kingdom but will complain about some other Christian who swore. I think Satan just loves it when that kind of stuff happens. To the many of us who are going after people we cry out "Get behind us, legalists!"

I find it helpful to remember that the Bible is an R-rated book. In that light it was laughable when secular critics complained that Mel Gibson's "The Passion of the Christ" was too graphically violent. The Bible's R-rating is there because it contains some pretty wild sexual situations. Like Genesis 19, where old Lot gets drunk and has sex with his two daughters. How would you film that? Have you read the "Song of Solomon" recently? And, in the Bible we have the word "dung." Do you know what that 4-letter word means? God doesn't seem the slight bit embarrassed that he put it in there, now wishing he hadn't as if it were a "typo."

When something is "vain" it is empty, and of no real value. To take God's name "in vain" would then include things like: promising God you would do something and then not doing it; promising before God that you will remain faithful to your spouse and not remaining faithful; saying "God bless you" when someone sneezes and not intending to bless them at all. Isn't that too legalistic? I don't think so. It's just a good example of vain-ness. In such instances "God bless you" does not really mean "God bless you." Sounds like true vanity to me.

To use God's name in vain is to misuse the name of God, in any way. Saying "God D_____t" or "Jesus Christ!"" can, and probably are, examples of this. But so much more is included. The matter really goes deep into the human heart. Like singing "Here I Am to Worship" without having a heart of worship. Like singing "I Love You Lord" and not loving the Lord. Like saying "Amen" to the words of Jesus while not following Jesus and living out His words. All hypocrisy is sheer vanity. "Christians" who are consistently "outraged" when others say "God D_____t" or "Jesus Christ!"" may themselves be consistently violating the third commandment.

So what if you meet a person who hyper-exgurgitates the f-word? For me the answer is: just witness to the sozo-ing activity of Jesus in your life. Love them, as you have been loved. Trust God to do the rest.
Posted by John Piippo at 10:54 AM