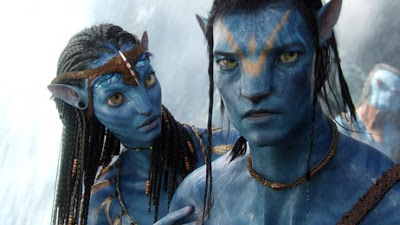 Today I: filled up the bird feeders in my back yard; tied to position one of them so squirrels could not get to it (which one enterprising squirrel did with incredible feats of mental ability and physical flex-ability, showing that a squirrel is smarter than a person; viz., me); made chili which is now slow-cooking; did some reading; talked witha  few people on the phone; talked with Linda; trembled as Linda started cleaning out the family room closet; and wrote on my website between it all as thoughts came to me.

Now, I write of "Avatar." We saw it yesterday. I recommend seeing it, if only for the 3-D effects. Visually, it's stunning. And the story line? It's the "noble savage" theory re-heated and pantheism celebrated. For a very good essay explaining America's EckhartTolleDeepakChopraOprahWinfreyJamesCameron-love affair with pantheism, see Ross Douthat's helpful nytimes essay here.

Douthat writes: "Pantheism has been Hollywood’s religion of choice for a generation now. It’s the truth that Kevin Costner discovered when he went dancing with wolves. It’s the metaphysic woven through Disney cartoons like “The Lion King” and “Pocahontas.” And it’s the dogma of George Lucas’s Jedi, whose mystical Force “surrounds us, penetrates us, and binds the galaxy together.”" "Avatar" is not about "when nature calls" but when one calls on "nature" and "nature" comes to the rescue. Which, of course, is a metaphysically silly idea. And, as we have known for some time now, the "noble savage" theory has no actual application.

I think Douthat is on target as he describes today's pantheism as expressive of the desire to find some kind of meaning in all of this mess when one has abandoned theism. "We pine for what we’ve left behind, and divinizing the natural world is an obvious way to express unease about our hyper-technological society. The threat of global warming, meanwhile, has lent the cult of Nature qualities that every successful religion needs — a crusading spirit, a rigorous set of ‘thou shalt nots,” and a piping-hot apocalypse."

I like rescue stories where good defeats evil. As this happens in "Avatar" I was cheering inside (as Scandinavians prefer over outward cheering). Unfortunately for pantheism, its noetic framework is fundamentally unable to account for such a thing. Whereas theism can. I simply cannot make sense of morality within a pantheistic framework. Douthat writes: "The question is whether Nature actually deserves a religious response. Traditional theism has to wrestle with the problem of evil: if God is good, why does he allow suffering and death? But Nature is suffering and death. Its harmonies require violence. Its “circle of life” is really a cycle of mortality. And the human societies that hew closest to the natural order aren’t the shining Edens of James Cameron’s fond imaginings. They’re places where existence tends to be nasty, brutish and short."

Douthat concludes: "If there’s no escape upward — or no God to take on flesh and come among us, as the Christmas story has it — a deeply tragic one. Pantheism offers a different sort of solution: a downward exit, an abandonment of our tragic self-consciousness, a re-merger with the natural world our ancestors half-escaped millennia ago. But except as dust and ashes, Nature cannot take us back."
Posted by John Piippo at 4:27 PM