Jesus Did Not Drive a Cadillac 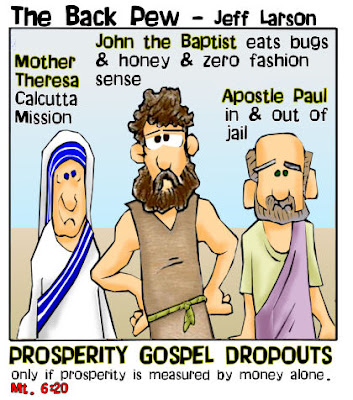 Some "prosperity Gospel" teachers argue that Jesus was materially wealthy. They do this to justify their own false "prosperity" teachings. Today at cnn.com we see the article "Passions over 'prosperity gospel': Was Jesus wealthy?" Prosperity teacher Thomas Anderson reasons: "Jesus couldn't have been poor because he received lucrative gifts -- gold, frankincense and myrrh -- at birth."

New Testament scholar Luke Timothy Johnson calls Anderson's argument "completely illogical." ""So Martin Luther King must have been a millionaire," he says. "Crowds followed Siddhartha Buddha and he was poor. And mobs followed Mahatma Gandhi, and Gandhi wore a diaper, for God's sake." The argument that Jesus was wealthy because the soldiers gambled for his clothes at his crucifixion doesn't makes historical sense, either, says Johnson, author of "Among the Gentiles: Greco-Roman Religion and Christianity."" Johnson says this because part of the prosperity-eisegesis says that the soldiers gambled for Jesus' undergarments because Jesus was wearing million-dollar undies (or Calvin Klein). Soon we'll see paintings of Jesus dying on a cross (which was, at that time, criminal-expendable-scandalous) wearing designer clothes. Luke Timothy Johnson says, "Crucifixion was the sort of execution carried out for slaves and for rebels," Johnson says. "It wasn't an execution for wealthy people."

The entire Kingdom of God message of Jesus in the actual Gospels (note: rarely seen on American TV because of the need to raise funds for one's own personal ministry) shows a preferential option for the poor. This is why Mary sings her song. And then there are the things the Real Jesus says about money. His words are found in Matthew, Mark, Luke, and John.

The CNN article says: [Baylor U. professor] "Bruce W. Longenecker says life in Jesus' world was brutal. About 90 percent of people lived in poverty. A famine or a bad crop could ruin a family. There was no middle class. "In the ancient world, you were relatively poor or filthy rich, there's very little in-between," says Longenecker, author of "Engaging Economics: New Testament Scenarios and Early Christian Reception." The New Testament is full of parables where Jesus actually condemns the rich and praises the poor, Longenecker says. In the sixth chapter of the Gospel of Luke, Jesus actually curses the rich, he says. "The only way you can make Jesus into a rich man is by advocating torturous interpretations and by being wholly naive historically," Longenecker says.

"My soul glorifies the Lord and my spirit rejoices in God my Savior, for he has been mindful of the humble state of his servant. From now on all generations will call me blessed, for the Mighty One has done great things for me— holy is his name. His mercy extends to those who fear him, from generation to generation. He has performed mighty deeds with his arm; he has scattered those who are proud in their inmost thoughts. He has brought down rulers from their thrones but has lifted up the humble. He has filled the hungry with good things but has sent the rich away empty."

P-Gospel eisegetist Tom Brown says that the proof that Jesus was a wealthy man "is scattered throughout the New Testament. One example: The 12th chapter of the Gospel of John says that Jesus had a treasurer, or a "keeper of the money bag." "The last time I checked, poor people don't have treasurers to take care their money," says Brown."

Are you kidding me? In that culture it was not uncommon for someone to carry the group "purse." In Jesus' disciples case the purse was small (envision Judas hauling a bag of money the size of Santa's bag). Judas stole from that purse (John 12:4-6). So was Judas rich? Later, he is given thirty pieces of silver to betray Jesus. That amount was symbolic, being the amount needed to buy a common slave. (equivalent to $25 U.S.) That is not a lot of money to a man who had been hauling the megabucks-bag of Jesus and his wealthy entourage. (Note: Here in America rich people carry their own wallets and purses. I carry a wallet. Today is Christmas morning. Therefore, my wallet does not have a lot of money in it.)

Prosperity-gospel proponents emulate the very honor-shame hierarchy that Jesus came to invert. They leave this world's masses feeling guilt because they do not have enough "faith" for more money, with their current impoverishment being the visible shame-filled sign of their "lack of faith."

My suggestion is: do a Jim Bakker-thing. When P-Gospel preacher Bakker was in prison he read, actually read, the four Gospels. He underlined everything Jesus said about money. Bakker then wrote his book I Was Wrong.
Posted by John Piippo at 8:52 AM