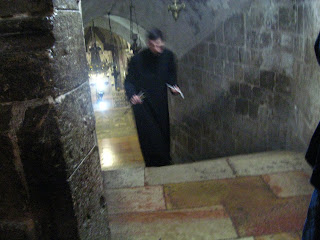 N.T. Wright, in Evil and the Justice of God, writes:

"We can project evil on to others, generating a culture of blame: it's always somebody else's fault, it's ociety's fault, it's the government's fault, and I am an innocent victim. Claiming the status of victim has become the new multicultural sport, as people scramble for the moral high ground in which they can emerge as pure and clean, and everybody else is to blame." (29)

Every week I meet someone who makes a choice that is evil and wreaks untold havoc on their marriage and family. It's only Tuesday and it's already happened a few times. The evil-wreaking soul then looks at all the nuclear residue they have launched and asks, in dismay and to my amazement, why people are talking about them. They are "victim," and others are to blame for their transgressions. As wild as this might sound, I have been blamed for not seeing the tragic transgression coming and stopping it before it happened.

When the rescuer enters into the post-transgression rubble and tries to save all that can be saved, the rescuer can get crucified on a cross erected on top of the mountain of evil. I am not complaining, and less and less do I fall into the trap of thinking that my real shortcomings are responsible for someone else's sin. I mean, if you are going to get crucified, get crucified for the right reasons.

There are real, true, undeserving victims in life. There are also faux-victims, many of them. There have been, since the Garden-event, when the fingers of Eve and Adam began pointing at one another. There will be because Satan, in the book of Revelation, is called "the accuser." Blaming is the name of his game.

Most likely, you are not a victim in your circumstances. Take responsibility. Own up to your own transgressions. Be yourself changed. When the breakup begins to happen in you you will see breakthrough happening around you.
Posted by John Piippo at 9:36 AM