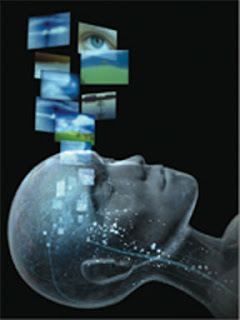 I've been telling my MCCC students that if you are looking for a career, engage in neural studies. Neuro-philosophy, neuro-psychology, neuro-sociology, neuro-everything- whatever. Neuro-studies and analyses are usurping, or threatning to usurp, the "human sciences."

At the heart of the discussion is the issue of consciousness. It remains a mystery. University of California psychologist Alison Gopnik has a nice little review of current consciousness-studies. (How Weird Is Consciousness? Scientists may not even be asking the right questions.)


The bullets are:
For further study, as related to Christian theism, see: J.P. Moreland, Consciousness and the Existence of God: A Theistic Argument; and Joel Green, Body, Soul, and Human Life: The Nature of Humanity in the Bible. Green appears to be the only New Testament scholar who is studying the contribution neural studies are making to biblical understanding.


Enter... neuro-theology (it's actually been around for a while), neuro-hermeneutics...
Posted by John Piippo at 10:03 AM