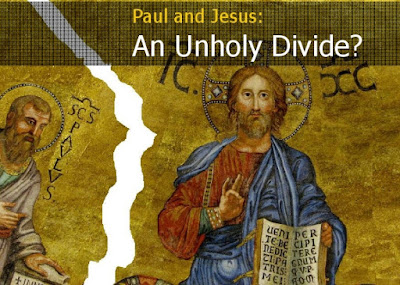 When I entered Northern Baptist Theological Seminary in 1974 the first course I took was on Paul's book of Romans. I remember being assigned to write a paper on the tough 9-11 chapters. That was a great class for me, taught by a great scholar, Manfred Brauch. Dr. Brauch was also my professor for New Testament theology. He used Ladd's Theology of the New Testament. I still have that book, and the cover is falling off an pages are underlined and dog-eared all over the place. A few years ago I was having lunch at Palmer seminary with Dr. Brauch and asked him if he would still look to Ladd today, and his answer was "yes."

For many years, for me, Paulinism prevailed, and my study of the Gospels was minimal in comparison. The thought came to me, "I am a 'Christian,' which means (as Paul knew) 'Christ, in me, the hope of glory.'" So I did Ph.D work in Christology, especially studying the Christology of the early Church Fathers as presented in, e.g., the classic Early Christian Doctrines by J.N.D. Kelly (I've still got that book, which is very well-worn, as I used it to prepare for one of my qualifiying exams).

I began to see that, in Christian Evangelicalism, Paul was emphasized more than Jesus. (Ladd was an exception) I rarely remember hearing messages about the Kingdom of God, as presented by Jesus. Now Scot McKnight confirms this for me some more, in an article in christianitytoday.com, "Jesus vs. Paul." McKnight writes:

"I grew up with, on, through, and in the apostle Paul. His letters were the heart of our Bible. From the time I began paying attention to my pastor's sermons, I can only recall sermons on 1 Corinthians—the whole book verse by verse, week by week—and Ephesians. I don't recall a series on any of the Gospels or on Jesus. There were two annual exceptions to our Pauline focus. At Christmas, we heard a sermon on one of the narratives about Jesus' birth, and during Holy Week, we got something on Jesus' death and resurrection. We were Pauline Christians and not one bit worried about it. I learned to think and believe and live in a Pauline fashion. Everything was filtered through Paul's theology. Justification was the lens for the gospel, and "life in the Spirit," the lens for Christian living."

Then McKnight took Walter Liefeld's class on the Synoptic Gospels at Trinity Evangelical Divinity School and was blown away as he was reintroduced, or introduced as if for the first time, to Jesus. He writes: "Something was clearly happening to me. Formerly I had loved Paul and thought with Paul. Then, when I encountered Jesus, as if for the first time, I began learning to think with Jesus. One of my colleagues occasionally suggested I was getting too Jesus-centered and ignoring Paul. I'm not so sure I was ignoring Paul; after all, I was teaching a few of his letters on a regular basis. But I had unlearned how to think in Pauline terms and was thinking only in the terms of Jesus. Everything was kingdom-centered for me."

And: "It can be said without exaggeration that the evangelical movement owes its fundamental strength to the Reformation and the Great Awakenings and revivals of the 18th and 19th centuries; that is, it is a Paul-shaped movement through and through."

But (and I am part of what happened next) "something has happened in the past two decades: a subtle but unmistakable shift among many evangelicals from a Pauline-centered theology to a Jesus-shaped kingdom vision. Sources for this shift surely include George Eldon Ladd's The Presence of the Future, the rugged and unrelenting justice voice of Jim Wallis, perhaps most notably in his Call to Conversion, and a growing social conscience among evangelicals."

After preaching for 5 years on Jesus and the Gospels, we'll soon be preaching the high Christology of Paul's letters. I am thrilled about doing this, especially since the Gospels will provide the foundation for this. How will I do with Paul? Historically, says McKnight, the Jesus-Paul thing has created tensions. I don't want it to be "Jesus vs. Paul." McKnight writes: "Those addicted to kingdom language struggle to make Paul fit, while those addicted to Paul's theological terms struggle to make Jesus fit. I know the experience because I, too, struggled to make the Pauline message fit the kingdom vision, and that was after struggling to make Jesus fit into the Pauline message."

The rest of McKnight's essay is about how to resolve this tension. It's worth reading, and is especially valuable for what we are doing at Redeemer. McKnight writes: "only when we grasp the gospel as the saving story about Jesus that completes Israel's story do we see the profound unity between Jesus and Paul. Both "gospeled" the same gospel because both told the story of Jesus."

In other words, Jesus preached Jesus, and not Paul. "If we begin with gospel, and if we understand gospel as Paul does in 1 Corinthians 15:1-11, then we will find what unifies Jesus and Paul—that both witness to Jesus as the center of God's story. The gospel is the core of the Bible, and the gospel is the story of Jesus."
Posted by John Piippo at 7:20 PM