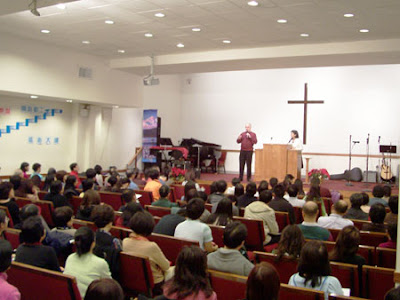 Here's a picture of me speaking in Faith Bible Church in New York City. I'll be going there to speak and teach Jan. 4-9. This powerful Chinese church has many people from the underground church in China. I've had some of them in my classes. It's very humbling to be with such real Jesus-followers who do so in the face of persecution.

Philip Yancey, interviewed here on his new book What Good Is God?, comments on the usefulness and reality of faith in God for Jesus-followers in persecuted nations. Yancey says that in China, for example, Christianity is different. Instead of praying "God, take away this burden," people pray "God, give me strength to bear this burden."

In America "church" is, for many, little more than a "social habit." But "in China, where you can be arrested and imprisoned for your faith, getting together with other Christians is a lifeline and you’ll risk anything for the privilege. No one attends church in China casually, or for a social advantage—quite the opposite."

Most Christians who read things like this may feel a little guilty about their own apathetic Christianity which translates into confessions like "I am so busy I just don't have time to pray," or "I'm so thankful to live in America and not China. They are so neurally locked into "Jesus as a social habit" that nothing is going to change.

But there is one thing that could bring change: persecution. Yancey says: "I once heard someone from a former Soviet country say that Christians there are praying for the return of oppression because under Communist days the church was pure and refined." And powerful, and threatening to the powers of darkness, like it now is in China. Like it was in the book of Acts.
Posted by John Piippo at 7:40 AM