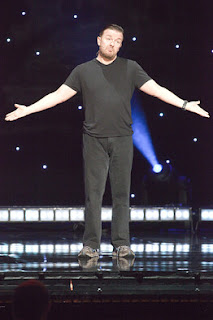 Today's Wall Street Journal has this article: "A Holiday Message from Ricky Gervais: Why I’m An Atheist."  (Thanks Greg for pointing me to this.) His thoughts + my thoughts are:
I don't think Gervais has a lot of logic going for him, at least not the kind of logic we teach in our philosophy department. Since, therefore, his atheism is rooted in so much illogical thinking, perhaps he should reconsider God?
Posted by John Piippo at 6:18 PM