Russia and China - Failed Attempts to Create an Atheistic Society 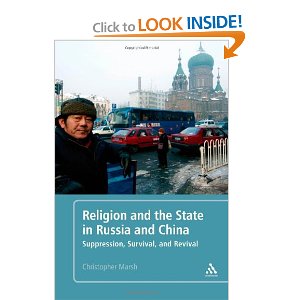 Today I've been prepping for my trip to New York City next week where I'll teach my Spiritual Transformation class at Faith Bible Seminary, and speak throughout the weekend (Jan. 8-9) at Faith Bible Church. The seminary and church was founded by my friend Dr. John Hao. It will be so good to be with John and his wife Rosie and the beautiful Chinese Jesus-follows at FBC!

While tracking down some information I want to share I rabbit-trailed to this forthcoming book by Baylor U. professor Christopher Marsh: Religion and the State in Russia and China: Suppression, Survival, and Revival (Continuum). It's coming out on January 20. As I looked at the chapter headings I thought - this looks valuable an interesting. I note them here, mostly for my own reference.

Those are creative headings!

Marsh's intro sentence reads: "One of the greatest ironies of the twentieth century must be that, while in the democratic West secularization was being proclaimed as the futre of the world, in the Communist East untold millions were suffering for their faith as they resisted the onslaught of forced secularization in the name of science and progress."

Marsh's book is about "the failed attempt to create an atheistic society" and what we can learn from this.

You can read the entire introduction at amazon.com, which is very cool.
Posted by John Piippo at 6:53 PM