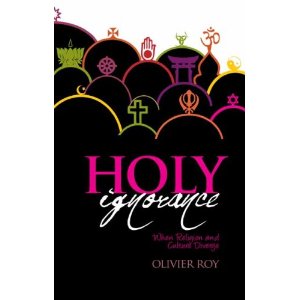 This one's for my own reference. I find myself using my blog for my own benefit; viz., in this case, to cite a resource for further reading. Scott Thomas, in the new edition of Foreign Affairs, cites Olivier Roy's forthcoming Holy Ignorance: When Religion and Culture Part Ways, which argues that "globalization is facilitating the detachment of religion, culture, and territory, this unraveling religious traditions from particular cultures and nationalities. Roy points to global religious movements such as Salafism, a militantly literalistic form of Islam; Pentecostalism; and evangelical Christianity to contend that fundamentalism is particularly well suited to globalization because its claim of a universal truth is inherently disconnected from particular states and societies." (Thomas)

I checked Roy's book out on amazon.com and see it's coming out in a few weeks. I also noted his book Globalized Islam: The Search for a New Ummah. The reviews of this are incredible. For example:"Roy is one of the most important analysts of political Islam today." -- James Piscatori, fellow, Oxford Centre for Islamic Studies and Wadham College, University of Oxford."

So, remember Olivier Roy if you're interested in Islamism.
Posted by John Piippo at 6:11 PM