Some Atheists Crusade for Ownership of the "Solstice Season" 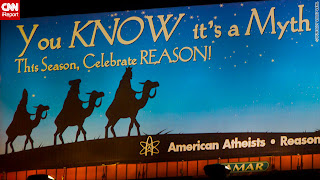 Some atheists feel the need to attack Christmas. So, they've spent $20,000 on this billboard in New York City.


1) To address those atheists who “go along to get along”, and to encourage them to come out of their closets

2) To attack the myth that Christianity owns the solstice season

3) To raise the awareness of the organization and the movement

Re. the closet, I'm quite sure that, were I an atheist, a billboard like this would make me stay in the closet and not come out for a long time. Or, I hopefully would already be out of the closet, but the billboard might frighten me into the closet. Why? For the same reasons attacking, judgmental Christian-legalistic self-righteous fundamentalists make me reluctant to affiliate with them. The good news about Jesus is not essentially an attack on others. The "let's go attack the Christian "myth"" strategy would not succeed in recruiting me.

But if Christianity is a myth, why attack it at all? Why spend that kind of money on attacking a myth, epecially if you are an atheist? Thank God there are plenty of atheists out there who would not waste their time on something like this.

And, BTW, I celebrate "reason" as much as these atheists do. I teach logic. I think, actually, that I have more to celebrate than they do since, on atheism, we arguably lack grounds or warrant for trusting in "reason." But tha's another story, and a very long one.
Posted by John Piippo at 11:07 PM