The Fake Christianity of the Early Slaveholders 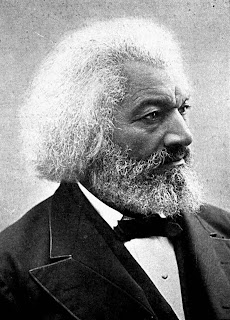 Frederick Douglass wrote a scathing appendix to his essay "Slaveholding Religion and the Christianity of Christ," which denounced slaveholding religion. Peter Paris says Douglass "wanted to make it perfectly clear that his description of the slave master's religion as an exercise in hypocrisy and deception should in no way be confused with what he called "authentic Christianity."" (Paris, The Spirituality of African Peoples, K 947-53) Douglass's words are incredibly courageous and bold, and true. How anyone could read the actual Gospels and hold slaves and treat them the way many did is outrageous. The entire Douglass quote below is brilliant, prophetic, true...


I can see no reason, but the most deceitful one, for calling the religion of this land Christianity. I look upon it as the climax of all misnomers, the boldest of all frauds, and the grossest of all libels. Never was there a clearer case of "stealing the livery of the court of heaven to serve the devil in." I am filled with unutterable loathing when I contemplate the religious pomp and show, together with the horrible inconsistencies, which every where surround me. We have men-stealers for ministers, women whippers for missionaries, and cradle-plunderers for church members.

The man who wields the blood clotted cowskin during the week fills the pulpit on Sunday, and claims to be a minister of the meek and lowly Jesus. The man who robs me of my earnings at the end of each week meets me as a class-leader on Sunday morning, to show me the way of life, and the path of salvation. He who sells my sister, for purposes of prostitution, stands forth as the pious advocate of purity. He who proclaims it a religious duty to read the Bible denies me the right of learning to read the name of the God who made me. He who is the religious advocate of marriage robs whole millions of its sacred influence, and leaves them to the ravages of wholesale pollution. The warm defender of the sacredness of the family relation is the same that scatters whole families,--sundering husbands and wives, parents and children, sisters and brothers,--leaving the hut vacant, and the hearth desolate. We see the thief preaching against theft, and the adulterer against adultery.

We have men sold to build churches, women sold to support the gospel, and babes sold to purchase Bibles for the POOR HEATHEN! ALL FOR THE GLORY OF GOD AND THE GOOD OF SOULS! The slave auctioneer's bell and the church-going bell chime in with each other, and the bitter cries of the heart-broken slave are drowned in the religious shouts of his pious master. Revivals of religion and revivals in the slave-trade go hand in hand together. The slave prison and the church stand near each other. The clanking of fetters and the rattling of chains in the prison, and the pious psalm and solemn prayer in the church, may be heard at the same time. The dealers in the bodies and souls of men erect their stand in the presence of the pulpit, and they mutually help each other. The dealer gives his blood-stained gold to support the pulpit, and the pulpit, in return, covers his infernal business with the garb of Christianity. Here we have religion and robbery the allies of each other --devils dressed in angels' robes, and hell presenting the semblance of paradise."

Paris says this "represents one of the most profound condemnations of slave holding Christianity emanating from the nineteenth century." (Ib., K 961-67) I find it prophetic as a transhistorical judgment against all hypocrisy and sham "Christianity," in contrast to what we plainly read of Jesus in the four Gospels. In the name of the One who came to set captives free people are held captive? How absurd and demonic!
Posted by John Piippo at 10:48 PM