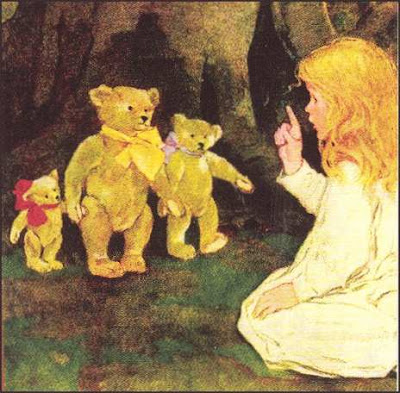 (We live in a "Goldilocks Universe")

For my Philosophy of Religion Students -Robin Collins considers the "multiverse alternative" to the fine-tuning argment for God's existence. Here are some notes, quotes, and further things re. arguing against the Atheistic "Many-Worlds Hypothesis."
ROBIN COLLINS OBJECTS TO THE MANY-UNIVERSES HYPOTHESIS
From “A Scientific Argument For the Existence of God” (in Pojman, Philosophy of Religion: An Anthology)

That our universe is fine-tuned for our existence is not debated by those who object to the Fine-Tuning Argument (FTA) for God’s existence.
Using Collins’s “prime principle of confirmation,” the fine-tuned universe demands an explanation. It seems that the alternatives are three: the fine-tuned universe exists by: 1) chance; 2) necessity; or 3)design. W.L. Craig argues that “necessity” is ruled out because if the fine-tuning necessarily exists then non-life-forming universes are impossible. Multiverse theory assumes that the fine-tuning cannot be necessary since it postulates a vast amount of life-prohibiting universes.
This leaves us with chance or design. If our universe is the only universe there is, then, using the prime principle of confirmation, clearly design is more probable than chance. See John Leslie’s “firing squad” analogy here.
Collins writes: “In response to the theistic explanation of fine-tuning of the cosmos, many atheists have offered an alternative explanation, what I will call the atheistic many-universes hypothesis (MUH)… According to this hypothesis, there are a very large – perhaps infinite – number of universes, with the fundamental parameters of physics varying from universe to universe.” (80)
Advocates of MUH rely on “the so-called vacuum fluctuation models and the oscillating big bang models.” (81)
The Vacuum Fluctuation Model
“According to vacuum fluctuation models, our universe, along with these other universes, were generated by quantum fluctuations in a preexisting superspace.” (81) Think of this preexisting superspace as an infinitely extending ocean full of soap. Think then of each universe generated out of this superspace as a soap bubble which spontaneously forms on the ocean.
The Oscillating Big Bang theory
This is the idea that our universe will eventually collapse in on itself (the “big crunch”). From that “big crunch” will come another “big bang,” forming a new universe, which will eventually collapse, then “bang,” and so on and on.
“According to those who use this model to attempt to explain the fine-tuning, during every cycle, the parameters of physics and the initial conditions of the universe are reset at random. Since this process of collapse, explosion, collapse, and explosion has been going on for all eternity, eventually a fine-tuned universe will occur, indeed, infinitely many of them.” (81)
Reasons to Reject the Atheistic MUH
#1 – “Everything else being equal, we should prefer hypotheses for which we have independent evidence or that are natural extrapolations from what we already know.” (81)
It’s hard to see how the MUH could be a natural extrapolation from what we already observe. Whereas postulating a “super-mind” is a natural extrapolation from our observation of minds in general.
“Moreover, unlike the MUH, we have some experiential evidence for the existence of God, namely religious experience.” (81)
#2 – The MUH needs a “many-universe generator,” which seems to need to have been designed. Such a generator “is governed by a complex set of physical laws that allow it to produce the universes. It stands to reason, therefore, that if these laws were slightly different the generator probably would not be able to produce any universes that could sustain life. After all, even my bread machine has to be made just right in order to work properly, and it only produces loaves of bread, not universes.” (82)
The MUH seems unable to avoid the design issue, only moving the problem of design to another level.
William Lane Craig writes: “Now this recourse to the World Ensemble will be in vain if it turns out that the mechanism that generates the World Ensemble must itself be fine-tuned, for then one has only kicked the problem upstairs. And, indeed, that does seem to be the case. The most popular candidate for a World Ensemble today, the inflationary multiverse, does appear to require fine-tuning. For example, M-theory, the theory which supposedly governs the multiverse, works only if there are exactly eleven dimensions—but it does nothing to explain why precisely that number of dimensions should exist.”

#3 – Another reason to reject the MUH “is that the universe generator must not only select the parameters of physics at random, but must actually randomly create or select the very laws of physics themselves. This makes the hypothesis even more far-fetched since it is difficult to see what possible physical mechanism could select or create laws.” (82)
Because just the right parameters of physics are needed for life to occur, the right set of laws is also needed. “If, for instance, certain laws of physics were missing, life would be impossible.” (82)
#4 – The atheistic MUH “cannot explain other features of the universe that seem to exhibit apparent design, whereas theism can.”
For example, Einstein and other physicists felt that the laws of physics themselves exhibit beauty, elegance, harmony, and ingenuity. “Now such beauty, elegance, and ingenuity make sense if the universe was designed by God. Under the atheistic MUH, however, there is no reason to expect the fundamental laws of physics to be elegant or beautiful.” (82)

#5 – “Neither the atheistic MUH )nor the atheistic single-universe hypothesis) can at present adequately account for the improbable initial arrangement of matter in the universe required by the second law of thermodynamics.” (82)
Some Objections to the Atheistic MUH by William Lane Craig
William lane Craig, in his essay “Barrow and Tipler On the Anthropic Principle and Divine Design,” offers objections to the atheistic MUH.
1. There is no evidence for any of these theories apart from the fact of intelligent life itself.
a. John Leslie points out that any evidence for a World Ensemble (multiverse) is equally evidence for a divine Designer.
2. The idea of an “infinite” number of universes raises the issue of “the paradoxical nature of the existence of an actually infinite number of things.”
3. “In order to stave off the conclusion of a Designer, the Anthropic philosopher must take the metaphysically speculative step of embracing a special kind of multiple universe scenario.”
a. “The Anthropic Principle is impotent unless it is conjoined with a profoundly metaphysical vision of reality.”
4. John Leslie argues that the God hypothesis is no more obscure than the MUH is, nor less scientific, “since natural laws and initial conditions are not generally taken to be scientifically explicable.”
Multiverse theory leaves science and engages in metaphysics.

Finally, here’s some things from a post I made.
A real problem arises for multiverse theorists: how can the existence of not only an infinite number of universes, but for that matter the existence of just one different universe, be empirically verified? How could, in principle, such a theory be tested? The answer appears to be: such a theory is not empirically testable and verifiable.Consider this from the on-line article “One universe or many? Panel holds unusual debate” (from which the above Linde quotes are also taken).
“Lawrence Krauss, a physicist and astronomer at Case Western Reserve University in Cleveland, said the whole multiverse idea is so speculative as to border on nonsense. It’s an outcome of an old impulse, which also gave rise to the correct notion that other planets exist, he argued: “We don’t want to be alone.”It also caters to our desire for stability, he added: the universe changes, but “the multiverse is always the same.” And if there are many universes, you don’t have to make any predictions that will subject your pet theory to awkward tests, “because there’s always one in which the answers work out.”Krauss allowed that he might buy the multiverse idea if it’s a consequence of some new theory that also successfully accounts for many other unexplained phenomena. But otherwise, multiverse concepts “are extending into philosophy” rather than science, he added, “and may not be testable.””
Posted by John Piippo at 4:22 PM