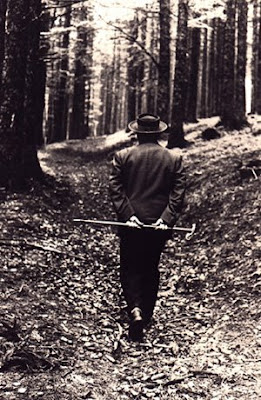 Here's a very good Heidegger site. For fun, follow within the site to this very clever "Being and Time" site. The discovery of this brings back memories of my fascination with and struggle to understand Heidegger.
It was in my undergraduate philosophy studies that I was introduced to Heidegger by one of my all-time favorite professors, Michael Gelven. The way I teach philosophy today is deeply indebted to Gelven as a teacher. He's also a brilliant Heidegger scholar.
I took an independent study on Heidegger in my Master's program with Tom Finger. It was on Being and Time. I think I was beginning to dimly understand some things about Heidegger. Heidegger's way of "thinking" (not "philosophizing" Western-style) is so paradigmatically different than Western logical philosophizing. I will always remain grateful to Tom for his interest in me and willingness to meet individually to mentor me (he also gave me an independent study on Hans-Georg Gadamer's Truth and Method).
In my doctoral work I took a seminar with Heidegger scholar David Michael Levin. We studied Heidegger's Early Greek Thinking. Levin was, and is, a truly brilliant scholar. I enjoyed him as a person, even though I struggled with understanding at the time. I think I did not have as much of a Heidegger background as did some of the other philosophy students. Northwestern University, at the time I was there, specialized in phenomenology (Heidegger and Gadamer being "hermeneutic phenomenologists").
Finally, a nod to my son Dan, who bravely took a course on Heidegger as an undergraduate at Michigan State University. I loved talking with with Dan as he tried to come to grips with this very different kind of thinking as taught by a professor who probably was a good scholar but struggled to actually teach.
Posted by John Piippo at 10:48 PM