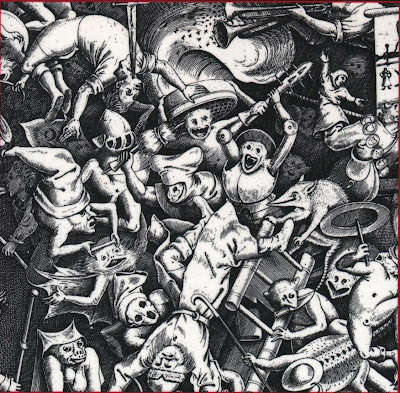 Here’s “the Logical Problem of Evil,” as formulated by the philosopher J.L. Mackie. This has been called "Mackie’s triad":
1. God is all-powerful.
2. God is wholly good.
3. Evil exists.
These three are thought to be logically inconsistent. This means one cannot affirm - simultaneously - the truth of all three statements.
Mackie adds some explanatory rules to make the inconsistency more obvious. Mackie believes that:

iv. A good being would always stop evil from happening. This means that a good being always eliminates evil as far as it can.
v. An all-powerful being is able to stop evil from happening. It can do anything. There are no limits to what an omnipotent being can do.
With these two explanatory rules added, Mackie thinks the logical inconsistency is obvious. Thus, for Mackie, to believe in the existence of God is positively irrational (= illogical).
Mackie's argument can be put in the form of what is called a logically "inconsistent triad". In this argument form, three propositions are inconsistent with each other such that one cannot hold all three at the same time without holding a contradiction. Holding such a contradiction would be like believing that:
a. This object is round.
b. This object is square.
It’s impossible to consistently or rationally believe both of these at the same time. Thus Mackie's argument from the problem of evil is an argument that seeks to demonstrate that the traditional theistic definition of God is logically incompatible with the existence of evil. It concludes that God cannot possibly exist if evil exists. Mackie argues that the theist cannot rationally believe in God's existence given the existence of evil.
Now NO ONE ACCEPTS THIS ARGUMENT AS A PROOF OF GOD’S NON-EXISTENCE TODAY. (See William Rowe's footnote #1 at the end of his essay in Pojman, Philosophy of Religion.) WHY NOT?
The decisive refutation was given by Alvin Plantinga.
To refute this all Plantinga needs to show is that it is possible to affirm (1), (2), and (3) together.
Here it is.

Suppose God wants John to freely refrain from taking a bribe. God will not control John’s choice, because John has free will. All God can do is give John free will.
So, one of the following propositions is true. But only one can be true. If one is true, the other is necessarily false.

c) If John has free will, then John will take the bribe.

d) If John is free, then John will not take the bribe.

If (c) is true, then John will take the bribe and God won’t get what he wants. Only if (d) is true will John do what God wants him to do.

Plantinga then argues that it is possible that every creature suffers in fact from transworld depravity. So, although there are possible worlds where creatures are free but commit no moral evil, these were not feasible worlds for God to actualize, since the truth-values of the relevant counterfactuals of freedom were not under His control. Because it is logically possible that God has given creaturely agents free will, has counterfactual, and transwordl depravity exists, then God cannot create a possible world where things work out just as he wants.
Therefore Mackie's triad does not present us with three logically incompatible statements. It is possible to affirm: 1) God is all-powerful; 2) God is all-loving; 3) evil exists.
Thus, God cannot always eliminate evil.
Posted by John Piippo at 5:12 PM