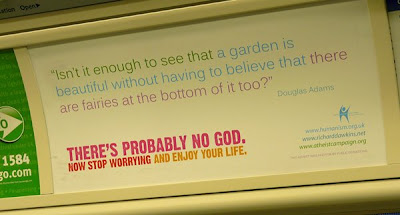 This picture shows one of the signs appearing on "atheist buses" in cities like London. It reads:

"Isn't it enough to see that a garden is beautiful without having to believe that there are fairies at the bottom if it too? There's probably no God. Now stop worrying and enjoy your life."

The God of theism with the requisite omni-attributes is quite different than a "fairy" with whatever attributes such a thing would have. An argument like the fine-tuning argument for God's existence reasons that whatever caused the fine-tuning of our universe could not have been a fairy. Therefore, the logical equivalence "God" and "fairy" fails. Logically, belief in God does not entail fairy-belief. So one can believe in God and reject the existence of fairies, or conclude that "probably" there are no fairies.

This particular bus poster reminds me of religious posters that make false claims. It only preachers to members of the choir who accept such irrationality.
Posted by John Piippo at 11:46 AM