Jerry Coyne's Confession of Faith In a Multiverse 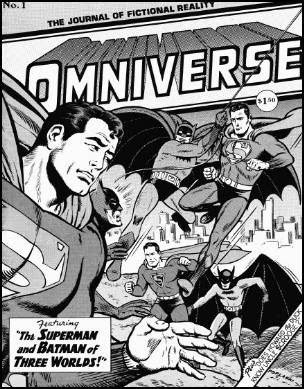 Jerry Coyne has written an article critiqueing the new books by physicist Karl Giberson (Saving Darwin: How to be a Christian and Believe in Evolution) and Brown University biologist Kenneth Miller (Only A Theory: Evolution and the Battle for America's Soul). Both Giberson and Miller are Christian theists, and argue for the compatibility of science (evolutionary theory) and religion (Christian theism). Coyne finds their critiques of Intelligent Design theory devastating, but thinks they are wrong about the idea that one can be a theist and embrace evolutionary theory.
Miller points to the fine-tuning argument for God's existence as offering but one reason to believe in God as a scientist. This argument states that the constants of the universe just happen to have life-promoting values. We inhabit a "Goldilocks universe," a universe which is "just right" for our existence. That our universe is fine-tuned for our existence is unquestionable. Some, like Miller (and myself), take this as evidence for a God who did this. Coyne, of course, disagrees. I find his disagreement unpersuasive.
Coyne says that "scientists have other explanations." Such as what? Such as the "multiverse theory." Coyne writes: "there are intriguing "multiverse" theories that invoke the appearance of many universes, each with different physical laws; and we could have evolved only in one whose laws permit life." But how is this response "scientific," since the existence of multiverses is as scientifically untestable as is the existence of God?
Coyne knows about this objection. He writes: "The idea of multiple universes may seem like a desperate move--a Hail Mary thrown out by physicists who are repelled by religious explanations." Pause here. Indeed, this is how it seems, not only to Christian theists but certain non-theistic scientists as well. See, e.g., my post Anthropic Coincidences & the Non-Verifiability of the Multiverse Theory. Coyne's response to this objection is: "But physics is full of ideas that are completely counterintuitive, and multiverse theories fall naturally out of long-standing ideas of physics. They represent physicists' attempts to give a naturalistic explanation for what others see as evidence of design. For many scientists, multiverses seem far more reasonable than the solipsistic assumption that our own universe with its 10,000,000,000, 000,000 planets was created just so a single species of mammal would evolve on one of them fourteen billion years later." But surely this is just begging the question. One assumes naturalism to begin with and then goes for the best current option - multiverses. Coyne says "for many scientists multiverses seem far more reasonable..." than belief in a God. But of course, if these scientists already are philosophical naturalists. Coyne's reasoning is circular, and achieves nothing except to function as a kind of confession.
Coyne continues: "Miller equates the faith of religious believers with physicists' "faith" in a naturalistic explanation for physical laws." Indeed. Coyne quotes Miller:
"Believers ... are right to remind skeptics and agnostics that one of their favored explanations for the nature of our existence involves an element of the imagination as wild as any tale in a sacred book: namely, the existence of countless parallel simultaneous universes with which we can never communicate and whose existence we cannot even test. Such belief also requires an extraordinary level of "faith" and the nonreligious would do well to admit as much."
Correct. Coyne responds: "Contrary to Miller's claim, the existence of multiverses does not require a leap of faith nearly as large as that of imagining a God." But, again, OF COURSE, if one is already philosophically committed to naturalism. Coyne's argument with Miller here reduces to a kind of "My dad is tougher than your dad" thing.
Coyne confessionally concludes: "It [multiverse theory] may be wrong, but wait a decade and we will know a lot more about the anthropic principle. In the meantime, it is simply wrong to claim that proposing a provisional and testable scientific hypothesis --not a "belief"--is equivalent to religious faith." I find this incoherent. Some think multiverse theory is in principle scientifically untestable. It strikes me as a matter of faith. "As wild as any tale in a sacred book," as Miller says.
Posted by John Piippo at 5:55 PM