The Atheist Bus Campaign As a Reflection of Neural Activity 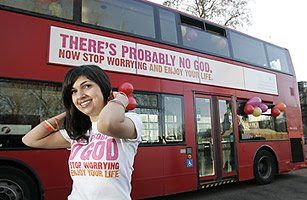 I heard about the atheist bus ad campaign a long time ago. Today's it's made Time magazine.

800 London buses have ads that read: "There's probably no God. Now stop worrying and enjoy your life." Atheist Ariane Sharine, who came up with the idea, says: "Our campaign provides reassurance for people who might be agnostic and don't quite believe, and worry what will happen to them if they don't."

Three Christian groups in London are countering with their own bus-ad campaign. The article says:

"Similar atheist campaigns have run in Barcelona, Madrid and Washington, D.C. But since its January 6 launch, the London scheme has been credited with inspiring atheist bus campaigns in Australia, Brazil, Canada, Germany and Italy, where next month posters in Genoa will read: "The bad news is that God does not exist. The good news is that we do not need him.""

Atheist Richard Dawkins says: "I don't object at all to the Christian ads that are going up, especially if they make people think. If more people think for themselves, we'll have fewer religious people."

Hmmm... just the opposite happened to me. I began to finally think, and the result was I became a follower of Jesus.

Then, I changed my undergraduate studies to philosophy. I loved thinking about the big issues of life, and for me at that time to major in philosophy was the best option. It challenged me to think a lot more, and to think deeply about things like meaning and knowledge and truth and right and wrong and personhood. This deeper thinking resulted in my thinking that my choice to follow Jesus was the right life-choice. 38 years later, after a whole lot of "deep thought," I'm grateful I chose to follow after Jesus.

The deep thinking of philosophy brought me, of course, face-to-face with atheism. One can't study philosophy without looking at all the best alternatives. Currently, my thinking includes viewing real atheism as philosophical naturalism (PN). On PN issues of right and wrong and truth and knowledge and meaning and personhood become logically inconsequential; viz., one can't derive non-empirical value-judgments from the empiricist philosophy of PN.

For me, the idea of an atheist "campaigning" for the "truth" of her worldview and against the "delusion" of theism is weird. Consider, e.g., Bertrand Russell's famous statement about atheism.

"That man is the product of causes which had no prevision of the end they were achieving; that his origin, his growth, his hopes and fears, his loves and his beliefs, are but the outcome of accidental collocations of atoms; that no fire, no heroism, no intensity of thought and feeling, can preserve an individual life beyond the grave; that all the labours of the ages, all the devotion, all the inspiration, all the noonday brightness of human genius, are destined to extinction in the vast death of the solar system, and that the whole temple of Man's achievement must inevitably be buried beneath the debris of a universe in ruins -- all these things, if not quite beyond dispute, are yet so nearly certain, that no philosophy which rejects them can hope to stand. Only within the scaffolding of these truths, only on the firm foundation of unyielding despair, can the soul's habitation henceforth be safely built."

Russell then attempts to say one must build one's life on "the scaffolding" of this worldview. Of course, if atheism is true, that's the only alternative. But remember that Russell thought, even though Nature was "omnipotent yet blind," that persons were "free." On PN-studies today, that is extremely questionable. When I was introduced to Russellian atheism I then studied French existentialist atheism, esp Camus and Sartre, and read Kafka and Nietzsche and watched Ingmar Bergman films. On those forms of atheism "campaigning" for the "truth" of atheism either doesn't happen because life is meaningless anyway, or does happen but, upon "thinking," seems "absurd," even makes one "nauseous." (Sartre) If PN is correct then there's a lot of "bad news." The bad news is that God does not exist. The bad news is also that without God life has no meaning. The bad news is probably that "thinking" is but the neural activity of the physical brain. The bad news is that my last sentence cannot be verified on PN. The good news is that an atheist need not feel bad about any of this. The bad news is that "feeling good and feeling bad" have nothing to do with meaning and truth. James Brown was right and he was wrong when he sang, "I feel good, like I knew that I would."

Perhaps the atheistic bus campaign is but an epiphenomenon of physical neural activity? If so, pay no attention to it, realizing that "paying attention to anything" is probably impossible (aka the problem of first-person subjective experience). Just a thought.
Posted by John Piippo at 8:33 AM