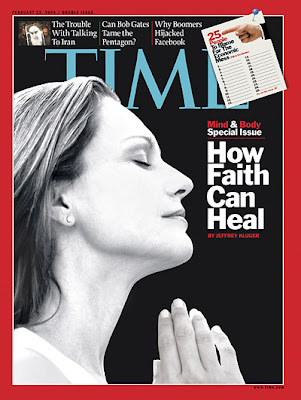 Philippians 4:8 reads: "Finally, brothers, whatever is true, whatever is noble, whatever is right, whatever is pure, whatever is lovely, whatever is admirable—if anything is excellent or praiseworthy—think about such things." Here is the idea that the things we think about (in the sense of pondering them and meditating on them) affect our whole being. Such as: much time spent playing violent video games and watching violent movies results in a reduction of helping behaviors. A recent University of Michigan study supports this. (See my 2/22/09 post on this.) This does not mean that if one plays violent games and watches violent movies that one will be violent. The study does claim to show that "violent video games and movies make people numb to the pain and suffering of others."

At Saturday's nytimes.com there was an article of another kind that supports the Philippians 4:8 truth. It's called:"Can Talk of a Depression Lead to One?" For example, thinking about the "Great Depression" "serves as a model for our expectations, damping what John Maynard Keynes called our “animal spirits,” reducing consumers’ willingness to spend and businesses’ willingness to hire and expand. The Depression narrative could easily end up as a self-fulfilling prophecy."

Forget for a moment the economic event called the "Great Depression" and think, but only briefly, about mental depression. As I have counseled many people over the years re. mood disorders, if they are followers of Jesus I refer them to Philippians 4:8 (if I think the origin of the person's depression is clinical I do this and refer them to a good clinician). Because I and they believe the Bible contains God-inspired truths, I encourage them to carry a list of such truths around with them and think much on them in the sense of meditating on them. For me personally, and for many others I am familiar with, depression lifts. The recent cover story of Time magazine lends support to the idea that people who have a strong faith in God generally fare better when it comes to physical and mental health.

For me none of this is some merer "positive thinking" technique. I want truth. As I fill my heart and mind with things that I find good, true, noble, pure, and lovely, I believe God forms my heart in light of such things.

So in my church, as a pastor, I don't want to bury my head in the sand re. the economic situation we now are in. I want to know which of my church family members are being hit by this and reach out to them and seek God re. helping them. And I'll continue to place my hope and trust in the God who years ago tore me out of a life of drug-darkness, and communicate this to our church family. On Sunday mornings we'll worship God for his greatness, love, and glory, and preach about the Real Jesus. I wonder what would happen in our community and country if we spent our days meditating on these things rather than meditating on the Great Depression?