Does the Brain Create God? 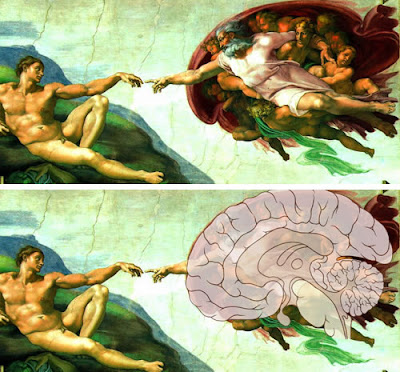 Neuro-studies are replacing the liberal arts (aka the "humanities"). Universities have science departments and these are not to be construed as humanities departments. But this is changing. Soon, there may be only science departments. This will create an unusual problem, which I'll visit below. Theology ("religious studies") is one area of the humanities destined for a fall.
It's Sunday night, I'm sitting in our family room with Linda awaiting the Academy Awards show. My laptop is, literally, on my lap. Late Sundays for me are often "New York Times" times. I've for some time now abandoned the hard copy New York Times for nytimes.com. On today's "front page" is a link to an archived article: "Darwin's God." (2/4/07) The article begins: "God has always been a puzzle for Scott Atran." Atran's burning questions include: are we humans hard-wired to believe in God? If so, how did that happen, and why? And, if one so explains religion, does one then explain religion away?
Re. the first question, the discovery that we humans are hard-wired for God-belief can be used in support of both theists and atheists. The theist can argue that, if the noetic framework of theism is true, then it's not improbable that God would make us "hard-wired" to connect with God. The nytimes article says: "What does this mean for belief in the supernatural? It means our brains are primed for it, ready to presume the presence of agents even when such presence confounds logic."
Atran teaches at the University of Michigan. I went to his website and checked out some of the links. This took me to a recent New Scientist article called "Born believers: How your brain creates God." (2/4/09) Atran's view is not that religion has evolved as an adaptation that increases the chances of survivability. His idea is that "religion emerges as a natural by-product of the way the human mind works." This is the "hard-wiring theory."
Psychologist Pascal Boyer says that, if this is true, it cannot mean that adults who believe in God are "childish or weak-minded." Put another way, those of us who believe in God are not the simple idiots Richard Dawkins takes us to be. Paul Bloom of Yale U. says that religion is an inescapable artefact of the wiring in our brains. Bloom states: "All humans possess the brain circuitry and that never goes away." Olivera Petrovich of Oxford U says that " even adults who describe themselves as atheists and agnostics are prone to supernatural thinking." Studies done on atheists show that "they often tacitly attribute purpose to significant or traumatic moments in their lives, as if some agency were intervening to make it happen. They don't completely exorcise the ghost of god - they just muzzle it."
"If religion is a natural consequence of how our brains work, where does that leave god? All the researchers involved stress that none of this says anything about the existence or otherwise of gods: as Barratt points out, whether or not a belief is true is independent of why people believe it. It does, however, suggests that god isn't going away, and that atheism will always be a hard sell. Religious belief is the "path of least resistance", says Boyer, while disbelief requires effort."
The hard-wiring theory "challenges the idea that religion is an adaptation." Atran says religion "arises as an artefact of the ability to build fictive worlds. I don't think there's an adaptation for religion any more than there's an adaptation to make airplanes."
This leads me to conclude that the statement "Humans are hard-wired to believe in God and the supernatural" could not be used, if true, to disprove the existence of God and the supernatural. Isn't it all, in that case, but a very big, juicy example of the genetic fallacy?
Of course, if the hard-wiring theory is true, then it's positively ignorant for "atheists" who have expended tons of mental effort to repress the hard-wiring to blame we who go with the flow. At most, their valiant Everest-kind-of-struggle does not conclude with "God does not exist" but in wearing a t-shirt that says "I climbed Mount Improbable."
As for the "agnostic," that poor creature, if there is a true one, is seen as someone whose hard-wiring is defective, leaving them with either no God to believe in and therefore no struggle to overcome should they "choose" to overcome it. Using Atran's reasoning, my guess is that an agnostic is not someone who does not "know" there is a God but who is refusing to make a "decision" to embrace the hard-wiring or climb Mount Improbable.
Finally, what will all this look like when the "humanities" are absorbed into neuro-studies? All that will be left will be "science." But by "science" we can't mean "science" as some understand it today, viz., as some kind of quest for "understanding and truth." The scientist herself is an emergent creature, rising out of the neural fabric that has either evolved for adaptibility or is hard-wired to "think scientifically" or a mixture of both. "Truth," which has always belonged to the humanities (as Hume and many others have shown us), will have disappeared.
Posted by John Piippo at 7:52 PM