The Need for Faith In a Multiverse 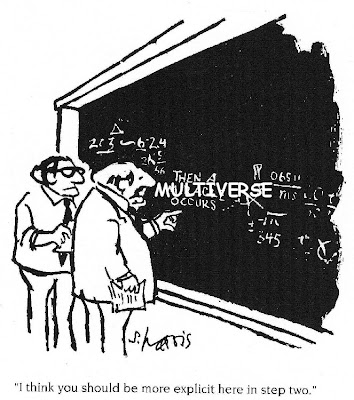 Jerry Coyne writes: "The idea of multiple universes may seem like a desperate move--a Hail Mary thrown out by physicists who are repelled by religious explanations. But physics is full of ideas that are completely counterintuitive, and multiverse theories fall naturally out of long-standing ideas of physics. They represent physicists' attempts to give a naturalistic explanation for what others see as evidence of design. For many scientists, multiverses seem far more reasonable than the solipsistic assumption that our own universe with its 10,000,000,000, 000,000 planets was created just so a single species of mammal would evolve on one of them fourteen billion years later."

For Coyne, multiverse theory seems more reasonable than belief in God. But of course, since his concern is to give a "naturalistic explanation for what others see as evidence of design." But if this universe is the only universe that exists and has ever existed, then belief in God seems reasonable precisely because it seems outrageously improbable that it should be a life-supporting unvierse (a "Goldilocks universe"). That is why I think, in spite of Coyne's words here, the "multiverse" idea is a "desperate move."
We seem to have two outrageous possibilities. The philosophical naturalist is baffled by anyone who could rationally believe a "God" created the universe. The theist is astounded that there is a "multiverse." I find God far more reasonable than multiverses. Here's why.
Multiverse theory seems, in principle, scientifically unverifiable. In fact, it strikes me as a good example of a real "solipsistic assumption." The idea that we dwell fully in our universe but need to verify an extra-universal universe poses problems. And even if we could, the verification of one other universe is a long, long way from empirically verifying a near-infinite number of universes. We're stuck in our universe, unable to see, smell, hear, taste, or touch anything outside of it. If that's not a kind of solipsism, I don't know what is.
Jerry Coyne and I were both born in 1949. Is the existence of a multiverse logically possible? I think so. Is it logically possible to verify it "scientifically?" I think so. All one needs to do is get outside of our universe and empirically detect a possible infinity of universes. Will Coyne and I ever see the day this happens? Probably, no. So for him it will, probably, always remain something like an article of faith, much like Carl Sagan believed aliens existed but never had scientific-empirical evidence that they did. (That long, long string of prime numbers emanating from outer space never was detected.)
For Coyne there must be something like a multiverse. He believes there's got to be some kind of thing other than God that explains the existence of us. Because the current big-time-verifiable reality seems to be that we are the only universe that has ever existed and ever will exist - again, as far as we scientifically know. We so far have a universe that is 14,000,000,000 years old which has produced... us. And that seems wildly improbable, far more than a "free lunch." (Here "free lunch" is a Hume-type weak analogy.) If that is the case, then I'll take God.
Posted by John Piippo at 7:04 PM