It's About Influence, Not Size 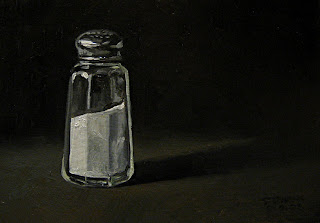 My heart's desire is to influence others for Christ. To be an influence for Jesus in my community. To be "salt" and "light."

Jesus said, "You are the salt of the earth." (Matthew 5:13) Salt has influence. Salt adds flavor. A salty life adds the flavor of Christ. As a Jesus-follower, you are salt. Allow Christ to shake you out of the saltshaker and flavor your environment and the lives of  people. Focus on being-shaken.

Be yourself influenced by Christ. Marinate daily in the teriyaki sauce of God. Slow-cook in the life of the Kingdom. You won't need to strive to influence others if you are transformed into an agent of influence. To influence, be influenced.

Forget about the size of your church family. Some churches are huge, numbers-wise, but their collective influence is proportionally miniscule. If everyone who says they are a "Christian" were the flavor-adding ingredient Jesus wants them to be one-third of the world's people would daily be shaken out upon our spiritually tasteless culture.

Forget about your personal stature. Christ, the hope of glory, dwells within you. Abiding in him results in being wielded, as an agent of righteousness, by him.

Forget about time. Instead, trust in God. Don't set your heart on instant results. A person's heart is a slow-cooker, not a microwave. People, and culture, are long-term projects. "Salt," once it gets a foot inside the door, spreads.

Historically and biblically, salt-shaking movements of God begin small, sometimes with only 12 people, often with just one. One person exuding the beauty of God's Kingdom, another Augustine or Bonhoeffer or Mother Teresa, even you, can be used by God to rock the world.

Focus on influence, not numbers.
Posted by John Piippo at 7:20 AM